We Are Human Rights is a project spearheaded by Dutch designer Bernhard Lenger. He paired seven designers with activists from around the world and asked them to work together to develop tools for change

The results, which were showcased in an exhibition for Dutch Design Week 2o18, tackled issues ranging from illegal settlements in Nicaragua to the criminalisation of homosexuality in Burundi.

"We are investigating new opportunities for design, to identify where designers can play an important role in our world," said Lenger.

"With these seven projects we are showing a variety of how design and international topics can come together, but also want to invite governments and private organisations to work together with us," he continued.

Each team was given three months to devise a solution to one particular issue.

The first project, How I Became an Ally from Not Giving a Shit, is by Rotterdam-based designer Daeun Lim. It is a digital platform that connects those who are interested in human rights activism in Kenya. 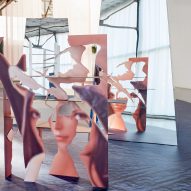 "Daeun will offer a platform that unifies grassroots human rights defenders and by this facilitates their access and possibility to attract allies. The platform will serve as their two-layer safety net – digital and physical," explained Lenger.

Another project, called Fishing For Futures, is an educational tool for use in rural communities in Colombia by Hannah van Luttervelt, which aims to show children alternative professions available to them when they are older.

"For children in rural communities, prosperity is presented on a narrow horizon. Become a prostitute if you are a girl, and a soldier if you are a boy," said the designer.

"This is a concept for an educational tool to empower children and show them different opportunities all in the form of games," she explained.

Lenger's own project, The Economy of Human Rights, responds to the criminalisation of homosexuality in Burundi. The project offers a safe platform where individuals who have been discriminated against for their sexuality are given a place where they can communicate ideas for change.

"This safe space will give a home to the creatives of Burundi to use their ideas to build towards an inclusive society and economy," said Lenger.

Maxime Benvenuto curated a news column in a hypothetical newspaper, where he displayed several news accounts of the same story from different international newspapers.

Responding to the potentially biased articles in the state run press, the project aims to diversify the type of news accessible to Russians.

Elsewhere, Jella Lena van Eck created a film that explores the abduction of people in Mexico, while Kornelia Dimitrova developed a range of research tools for illegal settlements in Nicaragua.

Lenger first launched We Are Human Rights at Dutch Design Week in 2017. In an interview with Dezeen at the time, he said that designers can't solve real-world problems on their own. "We are only a small cogwheel in an enormous machine," he said.

Lenger was also a speaker in Good Design for a Bad World, a series of talks organised by Dezeen and Dutch Design Week the same year, to explore whether designers can solve world issues. He presented his past project This is Ecocide, which saw him launch a campaign to criminalise destruction of the environment.

We Are Human Rights was on show at Sectie-C during Dutch Design Week 2018, which took place from 20 to 28 October.