Eco-minded designers have admitted to feeling guilty about creating products that help deplete resources and cause pollution at our Good Design for a Bad World talks in Eindhoven.

"Should we feel so guilty or not by what we're doing? Oh yeah!" said panelist Eline Strijkers, co-founder of Dutch sustainable architecture and interiors studio DoepelStrijkers.

But she added: "As long as you try to add value with what you're doing and really try to make a change and to make projects with meaning and no bullshit, I think we add value and it's okay to create [stuff]."

Strijkers, who aims to follow the principles of the circular economy in her projects, was responding to questions by moderator Marcus Fairs, who asked the panel how they felt about the "designer's paradox".

The phrase describes the contradiction inherent in trying to improve the world while designing products that consume resources and may well end up contributing to pollution.

The question came a day after designer Babette Porcelijn revealed that the stuff designers create is the biggest cause of climate change, ahead of usual suspects such as transport and agriculture.

Dave Hakkens, the young Dutch designer behind the Precious Plastics recycling project, said: "You wanna make something because you're a designer and you're educated to make things, but very often you realise that making something is not always the best solution."

"So sometimes it's more about changing someone's mindset or giving them other ways how to live their life which could have more impact instead of creating something new," he added.

"For the plastic project, we're really focusing on giving people the tools to do it, so we're more focused on sharing the knowledge of how to recycle plastic, but in terms of we don't really make anything," Hakkens said. "Our stuff is just digital."

"But that said, other people that start recycling they also need to make something out of it. Then you start thinking, what do I need to make? I know I can now turn this trash into something but what is the something gonna be? And I think that's a challenging question, yeah, because on the one had we already have enough.

Sustainability is too expensive for young designers

Bernhard Lenger, an Austrian designer who uses design to address global issues, said that he also grapples with the designer's paradox.

"The difficult thing especially as a young designer is that you want you use materials which are not bad for the environment but you can't afford them," said Lenger.

"Especially if you're a student, you have to work with the materials you can afford and that's a strange thing."

Lenger spoke about This is Ecocide, a project designed to draw attention to the lack of international laws outlawing environmental destruction.

For the project, Lenger teamed up with environmental lawyer Polly Higgins to create a public awareness campaign around the issue.

"I wanted to build a stage for This is Ecocide but if I really wanted to make it 100 per cent sustainable I couldn't do it," Lenger said. "People always asked me, why did you use plastic for this piece? I was just like, why is the plastic guilty of being bad rather than using this plastic to create a better future in the sense? The material doesn't have any guilt."

The profit motive means corporations can never be green

The panel were divided over whether the corporate world can transform from a destroyer to a protector of the environment.

Lenger argued that corporate CEOs are obliged to maximise profit, and could therefore lose their jobs if they pursue environmental strategies that impact revenues. Only the introduction of new laws can force corporations to change, he said, which is why designers should strive to get laws changed via projects like This is Ecocide. 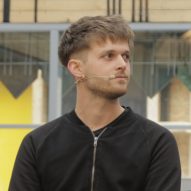 Hakkens, who worked with Google on his sustainable Phonebloks mobile phone concept, was also sceptical. "They care about making a profit," he said. "At some point that's gonna interfere [with their environmental ambitions]. I would say it's always better if solutions come from the people."

Strijkers was more optimistic however. "We work for big clients like [telecoms company] KPN or [bank] ABN AMRO and they have a really, the ambition to participate in the new economy. And they see that it can bring them much more, and that they cannot continue in the way they do now. It's not window dressing."

The pollution talk was the fourth of five Good Design for a Bad World talks held during Dutch Design Week in Eindhoven last October. The talks discussed whether design can help solve the big problems in the world.

Talk held in a building that explores circular design

The talks took place in a purpose-built structure called The People's Pavilion, which was itself an experiment in trying to adhere to the principles of the circular economy.

"The building you're in is actually a giant experiment," explained Dutch Design Foundation's Tim Vermeulen during the talk.

"It's a living lab, it's our attempt to build a 100 per cent circular building in a very thorough way, said Vermeulen, explaining that all the materials for the building were borrowed and would be returned at the end of Dutch Design Week.

"No screwing, no drilling, no glueing, no sawing," he said. "All the materials are left untouched. It's just a new way of looking at building so to say, so you're not the owner of the bricks or the pylons or the wooden beams, you're just a temporary caretaker of them."

Movies of all of the talks, including this one, are available to watch in full via our Good Design for a Bad World page, along with edited versions.