Emerald green walls and rippling rose gold ceilings feature inside Bar Lotus in Shanghai designed by Office AIO, which transitions from a coffee shop by day into a cocktail bar at night.

Situated on the sycamore tree-lined neighbourhood of Jing'an in Shanghai, Bar Lotus can be found at the end of a 100-metre-long monolithic block of single-storey concrete buildings that house various restaurants and bars.

The Beijing-based practice was initially asked to design a space solely to be a cocktail bar, but was soon tasked with incorporating a cafe to operate in the same space during daytime.

Office AIO founders Timothy Kwan and Isabelle Sun designed the cafe-cum-cocktail bar within a 130 square-metre building made up of two staggered rectangular volumes, which were formerly part of a larger restaurant and had no openings on the street-facing facade.

The designers created an entrance on this street-facing facade that leads to a long corridor. This long arched hallway divides the interior spaces into two main parts acting as a connecting space for the two rooms.

White perforated steel panels line the interior of the central hallway, giving the space a "sense of enclosure" while still allowing some of the sounds, lights and smells from each adjoining room to pass through.

Sliding mirrored walls cover the arched entrances to the cocktail bar – these are kept closed during the day to act as "invisible divisions" to separate off the bar area, reflecting the scenes in the central corridor.

Boasting a large floor-to-ceiling arched window, the southern street-facing room was designed to act as a daytime coffee shop, while the windowless northern room towards the back of the building was made into a nighttime cocktail bar. 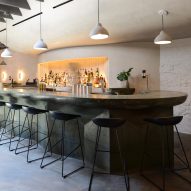 To complement the building's concrete exterior, Office AIO chose a muted palette for the cafe interior, with a grey-hued travertine floor that extends halfway up the walls, beige leather seats and knitted soft furnishings. These elements are illuminated by a minimal ring of light suspended from above.

In the evening the sliding mirrors are opened, allowing visitors to see through the archways to the cocktail room beyond.

The cafe is repurposed at night to accommodate a larger crowd, as the coffee counter becomes a coat check and reception, and the seating area becomes a private room for small parties.

According to Kwan, he and Sun wanted the interior to reflect the quirky yet classic style of the cocktails served at the bar.

The duo based the bar layout around a U-shaped structure in the centre of the room, which divides the open-plan space into two zones.

The interior design language of the daytime cafe is continued to the area surrounding the U-shaped structure, where dusty pink walls and knitted poufs dotted around the open space are illuminated by soft, circular lights hanging from the ceiling.

Lined with multiple open archway entrances, the interior walls of the U-shaped structure are coated in a emerald green textured plaster, with a shimmering, rippled rose gold sheet of stainless steel for the ceiling.

This space was intended to act as a "mingling" area, and encapsulates a long, slender table made from Rossa Lavanto marble in the centre.

The rippling stainless steel effect is replicated onto the back wall where the bar is situated, which is back-lit with a warm coppery beam of light.

More architecture and design in Shanghai