Monolithic white blocks and handmade bricks feature inside London Spa, which Richard Bell Architecture has constructed under a home in the west of the city.

The spa forms part of a subterranean extension that Richard Bell Architecture added to a Victorian-era property in the affluent Chelsea neighbourhood, which also accommodates a sauna, steam room, gym and changing area.

Completed in a restricted material and colour palette, the space's interiors – which are shortlisted in the inaugural Dezeen Awards – are intended to be a reaction against wellness areas that the studio's founder Richard Bell had seen in other homes around the capital.

"The client asked me to look at what others had done in the way of residential spas in London and I was pretty amazed by how busy, convoluted and bright some of them were. Particularly those that were trying to pretend not to be underground," Bell told Dezeen.

"In the case of a spa, I think it is really important that the space is simple, calm, and quiet – a peaceful place to be," he added. 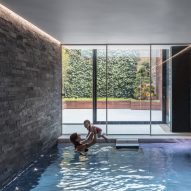 The spa area is accessed via a set of stairs that run adjacent to a small lightwell planted with shrubs. Two stacked white volumes dominate the space, straddling the swimming pool underneath.

Peripheral walls are built with 10,000 handmade bricks. Their pale hue contrasts against the ceiling, which is covered with planks of cherry wood to conceal the extensive framework supporting the garden above.

"As the light tracks over the rough-hewn surface of the bricks, it picks out a shifting landscape of ridges and valleys in miniature," explained Bell's team.

In attempt to introduce a sense of "playfulness" to the spa, a four-metre-long spout is suspended from the ceiling, which fills a basin below with water. Lighting is provided by a handful of simple pendant lamps with exposed light bulbs.

"The raking light, the shadowy spaces, the reflections and the materiality combine in this spa to create a space with a quiet intensity and a gentle drama," added the team.

Below-ground wellness and leisure rooms are becoming more and more common in London.

Photography is by Hélène Binet unless stated otherwise.