With four days to go until the Dezeen Awards ceremony, Dutch design studio Atelier NL have completed the hand-made trophies that will be handed to winners on the night.

The clay trophies will be given to all 33 winners at an an exclusive award ceremony hosted by British comedian Sir Lenny Henry in London on Tuesday 27 November.

Each trophy was moulded by hand by craftspeople at brick manufacturer Wienerberger, which makes traditional London stock bricks at its Smeed Dean factory near Sittingbourne in Kent.

The trophies are made from London clay, the material used to make the traditional yellow bricks that are a defining characteristic of buildings across the UK capital.

"Since Dezeen is founded and located in London it was a very obvious choice to work with London clay," said Nadine Sterk of Atelier NL.

"London clay is emblematic of the city as it is not only the ground the city was built upon but also the material its buildings are made of."

The trophies are based on the shape of a brick but customised to form the letter "d" for Dezeen. Each one features a traditional indentation in the top surface that is called a "frog". This is in reference to the frog-like form placed in the brick mould to achieve the indent.

Once moulded and stamped with the Dezeen Awards logo, the trophies were dried for 50 hours before being fired in a kiln at 1,025 degrees Celsius.

After firing, the trophies turned the signature yellow colour of London stock bricks, which is a result of the high level of calcium found in the clay.

"Our collaboration with Wienerberger's Smeed Dean factory is what makes the trophies authentic," said Sterk. "Apart from using our custom mould, the production process of a trophy is identical to the one of any other brick."

The clay used for London stock bricks contains pieces of glass, rocks and metal, which gives each trophy its own rough texture.

Each trophy comes with a special wooden presentation box. The details of the winning project, studio and category are etched on a folder piece of metal made by Eindhoven-based graphic design studio HeyHeydeHaas. The metal plaque slots into the presentation box and serves as a base for the trophy when displayed outside the box.

Based in Eindhoven, Atelier NL is headed by Sterk and Lonny van Ryswyck. The duo produce ceramics and glassware using natural materials. Their work features locally sourced materials, which gives each project a connection to a particular place.

"With our work we often try to amplify the stories natural resources tell about a place," Sterk told Dezeen.

Dezeen recently filmed an interview with Atelier NL at their Eindhoven studio, where they set our their design approach and talked about their plans for the Dezeen Awards trophy.

"We're interested in natural materials because it tells you about history, geology, chemistry and how our world is actually built up," Van Ryswyck explained.

Each of the 24 category winners in the architecture, interiors and design project categories will receive a trophy. The remaining nine will go to the winners of the overall best architecture, interiors and design project, selected from the winners of each project category; plus the studio category winners. These recognise the best architect, interior designer and designer in both the established and emerging categories. 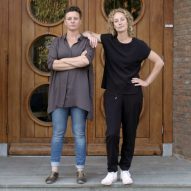