Atelier NL co-founders Nadine Sterk and Lonny van Ryswyck explain how they will use London clay to create the trophies for the inaugural Dezeen Awards, in this movie Dezeen filmed at their Eindhoven studio.

Dutch designers Sterk and Van Ryswyck, who run their studio Atelier NL from a converted former church in Eindhoven, the Netherlands, will make the trophies for the inaugural Dezeen Awards from London clay.

The material underlies much of Dezeen's home city and has been used for centuries to construct buildings in the UK capital.

"Dezeen asked us to design the trophy for Dezeen Awards, and we were very excited by that," Van Ryswyck explains in the movie, which Dezeen filmed in Eindhoven.

"Since Dezeen is founded and located in London, it was a very obvious choice to work with London clay," Sterk adds.

Atelier NL sourced the clay from London stock brick manufacturer Wienerberger's Smeed Dean factory. They will now work with the material to develop the design for the trophies, which will be handed out to Dezeen Awards winners at the ceremony in London on 27 November 2018.

"Now we're going to look at the clay, feel the clay, smell the clay and start developing the design," Van Ryswyck adds.

The Dezeen Awards trophies will be the latest in a series of objects produced by the design duo using local materials from specific locations.

Across a number of different projects, Sterk and Van Ryswyck have archived and catalogued different material samples from around the world and made geographically specific ceramic and glass items from them. 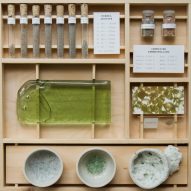 "We're interested in natural materials because it tells you about history, geology, chemistry and how our world is actually built up," Van Ryswyck explains.

"Most of the time we're actually making samples and tests and creating these libraries of soil samples and sand samples," Sterk adds.

One such example their recent project To See the World in a Grain of Sand, where Sterk and Van Ryswyck crowdsourced hundreds of different sand samples from around the world in plastic bottles.

They encouraged participants to send in photos and stories of the location where the sand came from to give a sense of identity and origin to each sand sample they received.

"We asked people to send us sand from all over the world from beaches, quarries, dunes and mines," Van Ryswyck explains.

They presented findings from the project during Dutch Design Week in 2017, where they acted as ambassadors alongside MVRDV co-founder Winy Maas and Dezeen's editor-in-chief Marcus Fairs.

Aside from archiving each sand sample, the duo used the sand to produce glass samples in small ceramic pots, which revealed a range of different colours of glass such as various shades of blue, green and brown.

For their related project ZandGlas, which is nominated for a Dezeen Award in the homeware design category, the duo created a collection of light blue and green glass drinking vessels using sand from a man-made peninsula in the south of the Netherlands called Zandmotor.

The peninsula is an artificial shoreline built in 2011 to reinforce the coastline in the face of climate change.

The duo released a second edition of ZandGlas in 2017, producing a collection using brown sand from the Savelsbos forest in the province of Limburg, which gave a deep green colour to the final glass products.

"We're building a whole library of sands from all over the world to discover how many different types of glass we can make and colours," says Van Ryswyck.

"Every type of sand has its own selection of minerals inside and those minerals expose a complete different range of colours," Sterk explains.

Its Drawn From Clay project is a collection of tableware produced with clay from various farms in the agricultural region of Noordoostpolder in the Netherlands.

Working with the local farmers, Sterk and Van Ryswyck collected clay from various plots to produce dinner sets consisting of bowls, plates, cups as well as serving plates and vases.

After firing, the ceramic pieces revealed various colours and textures that were specific to the plot of land where clay was collected from.

Atelier NL will produce 33 unique trophies for Dezeen Awards, which will be presented to the category winners at an exclusive award ceremony in a landmark building in central London on 27 November 2018.

Each of the 24 category winners in the architecture, interiors and design project categories will receive an award. The remaining nine will go to the Ultimate Dezeen Awards winners. These recognise the best architect, interior designer and designer in both the established and emerging categories, as well as the overall best architecture, interiors and design project, selected from the winners of each project category.

In addition to their project ZandGlas being shortlisted in the homeware design category, Atelier NL has also been shortlisted for a Ultimate Dezeen Award in the Designer of the Year category.