Yellow material shaped to resemble smiley faces is draped from this installation by Studio Cadena, erected outside New York City's Flatiron Building for the holiday season.

The Happy temporary structure occupies a wedge of unused space at the intersection of Broadway, Fifth Avenue, and 23rd Street.

Visitors are invited to move between the 23 transparent yellow vinyl screens hung over a black frame, which forms a triangular footprint similar to the iconic Flatiron Building located opposite.

Each piece of the tinted material is rounded at the bottom and punctured with circular openings that offer a clearer view through – altogether resembling smiling faces.

Studio Cadena, which is based in both Brooklyn and Bogota, designed the colourful and playful structure to offer light relief at the end a tumultuous year in the US.

"In our otherwise bleak social and political context, it aspires to carve a small and more positive space in the city – it offers a warm embrace during the cold winter months," said studio founder Benjamin Cadena in a project description.

The designers chose the coloured fabric to tint views of the surroundings, and placed a series of large round lights inside the structure so that it glows at night. 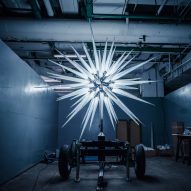 The yellow stands out against the greenery of nearby Madison Square Park, and popped against the snow that fell unseasonably early this year – as shown in these photographs.

Studio Cadena – which has also designed an industrial loft in Brooklyn – created the installation for the Flatiron Public Plaza Design Competition.

Now in its fifth edition, the annual contest is held by the Flatiron/23rd Street Partnership Business Improvement District and Van Alen Institute, and seeks designs for structures to fill the same compact space each year. In 2017, the design comprised a set of "choir-like" mirrored tubes.

Happy was selected over nine other proposals – including schemes by local studios Agency-Agency and Office III – and opened to the public on 19 November 2018. It will remain on show until 1 January 2019.

"We all wish each other happiness during the holidays," said Cadena. "This installation physically manifests this well wishing to all who visit Flatiron."

Elsewhere, New York City is gearing up for holiday season with the installation of Daniel Libeskind's Swarovski Star at the top of the Rockefeller Center Christmas tree.

Photography is by Benjamin Cadena, unless stated otherwise. 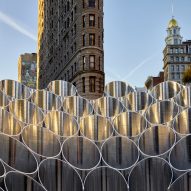