Debuted at the Shanghai CIEE trade fair, the SIN electric car is designed with the city dweller in mind, as a connected, affordable and sustainable mode of urban transport.

These were produced in collaboration with big-name designers such as Danish design supergroup KiBiSi, London designer Ross Lovegrove and Bjarke Ingels of BIG to name a few.

Like each of the Biomega bikes, the car's name is an abbreviation of the city that inspired it, in this case, Singapore.

SIN incorporates four independent engines, four doors and four seats. Inside, its design has been reduced as far as possible in accordance with the less-is-more principles of Scandinavian design. An aluminium crossbeam holds up the steering wheel, and a large "info-tainment" tablet.

Its minimal components and lightweight materials, such as modular carbon fibre, allow for ample legroom while reducing its overall weight and battery consumption. The company said that the car will be able to complete the 0-100 kilometres per hour standard in roughly 13 seconds, and can hit a top speed of 130 kilometres per hour.

The design's new open-wheel vehicle typology allows for a flat floor and easy manoeuvring in tight urban spaces. The car's main 14kWh battery pack is housed under its floor and its wide fascia window is intended to maximise the road view.

"We've been focused on urban mobility since the 1990s," said Danish design entrepreneur and Biomega founder Jens Martin Skibsted. "Biomega has always been about creating a paradigm shift in the way society imagines transportation. We feel that we are in an extremely strong position to design an electric vehicle (EV) that represents the frontier of the new mobility." 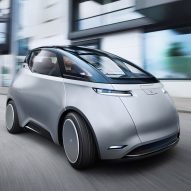 "We are working on a new spectrum of vehicles where, for now, the EV is the largest and the bicycle is the most compact; making SIN another step in the natural progression of our ongoing battle against the combustion car."

Biomega also reported that the SIN will focus on connectivity and user interface, and has the potential to be adapted for a wide range of consumer opportunities, including business models such as ride sharing or leasing. 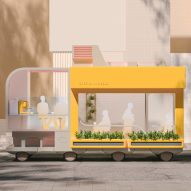 Space10 envisions future of self-driving cars as farms, hotels and clinics on wheels

Also debuted this month and scheduled to go into production in the UK by 2020 is Swedish automotive start-up Uniti's first vehicle launch – an "affordable" and fully electric car called Uniti One.

The vehicle has a host of innovative features including a connective and intuitive user interface, and will have high energy efficiency, with a 22kWh battery that is estimated to power the vehicle for up to 186 miles (300 kilometres) on one charge.