A terrazzo-like print covers the surfaces of this installation that Note Design Studio created for flooring brand Tarkett, which won Small Interior of the Year 2018 at Dezeen Awards.

Named The Lookout, the two-level installation comprises of a sequence of muted rooms with subtly patterned surfaces, and was praised by the awards judging panel for its "clever detailing and beautiful aesthetics".

Note Design Studio created it for this year's Stockholm Furniture Fair, after they were approached by Tarkett to redesign a typical fair stand in a way that would encourage visitors to "experience how floor materials can be used in new and unexpected ways".

"Tarkett is a monumentally large company and Note is a very small design studio. When we started working with the project it was like trying to turn an ocean liner with a rowing boat," Cristiano Pigazzini, design manager at the studio, told Dezeen.

"Together we did not only find a fresh and relevant way to show the potential of an overlooked material, but we'd also like to believe that we injected some energy and inspiration within Tarkett."

Note Design Studio had free reign over Tarkett's extensive catalogue of materials, but they decided to make use of flecked homogeneous vinyl – the brand's most popular flooring finish. This has been used to cover the installation's six-metre-high walls, display counters and chunky rust-red staircase where visitors were invited to sit and relax. 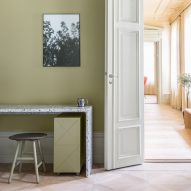 A secondary set of black stairs leads to a viewpoint where visitors could observe the crowds of the fair from above.

"We operated on two levels – one catches interest from afar, the other attracts visitors from a close perspective," explained Kerstin Lagerlöf, marketing manager at Tarkett.

The majority of surfaces are completed in shades of moss-green, pale grey, and terracotta brown, with a bold splash of colour provided by four coral pink armchairs that were used to dress the space.

Some of the vinyl walls also feature a checkerboard motif, circular cutouts, or have been folded to create a concertina effect.

The Lookout wasn't Note Design Studio's only win at the inaugural Dezeen Awards – the studio was also awarded Residential Interior of the Year for its Hidden Tints project, a 19th-century office that has been converted into a home.

Completed in pastel shades of pink, yellow, and green, the property was commended by judges for its "impressive and thoughtful use of colour".

The Note Design Studio team competed head-to-head against studios like Smartvoll, who was shortlisted for its light-filled loft apartment in Salzburg, and JAAK Design, who was nominated for its KEVIN project – a 33-square-metre flat in Hong Kong.