New French company Zoov has worked with Parisian design office Eliumstudio to develop a system of electric share bikes that lock on to each other for parking, creating minimal intrusion on streets and footpaths.

Zoov aims to address one of the complaints about dockless share bikes like Mobike's, which users park virtually anywhere once they're done riding, but which some see as "littering" the urban environment.

At the same time, its stations take up significantly less room than traditional docked bike hire schemes such as London's Santander Cycles and New York's Citi Bike. Rather than sliding into a dock, the bikes simply lock onto each other, a bit like horizontally stacked shopping trolleys.

The Zoov docks can store 20 bikes in the space typically occupied by one car, while a traditional bike parking system would take four times that space.

"The aim of Zoov was to propose a shared e-bike service that would be respectful of the urban environment and designed to integrate seamlessly into city life," said Eliumstudio founder Pierre Garner. "It is a public-spirited approach, and it takes up the challenge of user respect for the urban space, which is particularly encouraged by the design of the bike, which facilitates the use of lightweight, ultra-compact stations that reduce urban impact."

Zoov will first launch its service in the Saclay Plateau, an innovation hub 20 kilometres south of Paris, before expanding to other large French cities in 2019. It was started by Eric Carreel, co-founder of connected health company Withings.

Eliumstudio came on board approximately a year ago to help Zoov with the design of the bicycles, which lock together at the handlebars and rear wheels.

Aesthetically, they're distinguished by a sky-blue curved line that runs the length of the bike frame and highlights its simplicity. Garner says this element also creates a visual continuity when multiple bikes are connected together.

"When parked and physically interconnected, Zoov bikes blend naturally into the other street furniture," said Garner. "They punctuate the cityscape rather than dominate it."

A battery attached to the frame, in what would be the usual drink-bottle spot, provides pedal assistance and there is also a powerbank so users can charge their phones. 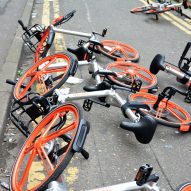 Dockless bike hire schemes now operate in many of the world's cities, enabled by GPS trackers, QR locks and smartphones.

While they have been popular, Mobike – probably the world's largest such operator, with a fleet of nine million bicycles – made headlines when it stopped operating in the English city of Manchester this year.

The company blamed high levels of theft and vandalism for the withdrawal after Mobikes were spotted thrown in canals, set on fire, hidden in gardens and dumped on pavements.

Garner said the design of the Zoov scheme is intended to educate the public and change its attitude towards shared property.

"Despite having only just arrived in Europe, shared bike solutions have already been severely criticised," said Garner. "Their garish colours, their intrusive installation with no public consultation, and their uncontrolled occupation of public spaces make them difficult to integrate properly into cities whose layout may be up to a thousand years old."

"This design has a number of educational values and is intended to change users' habits and behaviour. Our major challenge was all about creating an electric bike that respects not only the city, but also all those who live in it and use it."

Eliumstudio was founded in 2002. It has previously worked with Carreel's other company, Withings, on the design of the Thermo children's thermometer that works with a swipe across the forehead and the analogue-looking Activité smartwatch.