Chinese company Mobike will be withdrawing its fleet of dockless bicycles from Manchester, following ongoing abuse and loses.

The smart bike-sharing company, which operates in 200 cities, has announced its plan to leave the English city, making it the first to lose the company's dockless bikes.

In a press release titled "Goodbyes are never easy", Mobike apologised to its bike-users in Manchester and sited "increased bike losses due to theft and vandalism in the city" as its reason for suspending service in the city. The company will be refunding deposits to all Manchester users.

Manchester was first European city to have Mobikes

Mobike has more than nine million bikes on the streets world-wide. Manchester became the first European city to host the Chinese-developed dockless city bikes, when they were introduced in July 2017.

The company will continue operating in the English cities of London, Newcastle, Oxford and Cambridge, as well as across Europe in cities including Paris, Berlin, Madrid and Milan.

Over the past 18 months, Mobikes in Manchester have been thrown in canals, set on fire, hidden in gardens and dumped on pavements. Shortly after the launch, a group of young people in east Manchester were filmed throwing rocks at a Mobike in an attempt to destroy it.

This persistent vandalism has led Mobike to withdraw from the city.

"As a private company, we have a duty to ensure our revenues cover our costs since unlike some operators we do not use taxpayer money to help balance our books," said Jan Van der Ven, general manager of Mobike UK.

"Unfortunately the circumstances in Manchester have not made this possible."

In November 2017, less than four months after the Manchester launch, Mobikes withdrew its initial 1,000 bikes from the city, before returning in reduced operating zone.

At the time Steve Pyer of Mobike UK was reported as saying that vandalism in the city was not above average. "In every city we have launched, we have observed a small element of misuse in the weeks following launch, but the number of issues always decrease," he said.

"It is the case for Manchester: the amount of vandalism reports stabilised a few weeks into the scheme, and is now steadily declining." 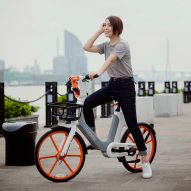 The short history of Mobike in Manchester has been full of lessons for the company according to Van der Ven.

"We have all learnt valuable lessons that will help cities continue to make urban life more sustainable, more active and more healthy through cycling," he said.