British architect David Adjaye has designed the trophy for the winners of next year's Brit Awards, which swaps the traditional hourglass for a figure with "unique" proportions.

The trophies are cast in solid glass, finished with a translucent, frosty effect.

They take the form of Britannia, the female personification of Britain. But Adjaye – who was born in Tanzania, but is now based in London – designed an alternative to the character's traditional slender form.

"My take on the Brit trophy is the manifestation of a great material forged in fire and shaped into the body of a woman. She is unique, and proportionally she is very different," said the architect.

"The Brit Awards are a quintessential part of a celebration of British talent and a powerful forum to really talk about the evolving nature of British culture and the contribution of people to that culture," he continued.

"For me, designing the award was an opportunity to question and explore – what is the nature of perfection and imperfection, what is the notion of beauty. It was exciting to transfer those ideas to a smaller object. Now, we have something that I really, really love; I'm very happy with it."

The architect produced the trophies with Czech glass and lighting brand Lasvit, which adopted a complex glass casting process to create the one-of-a-kind set of statues. 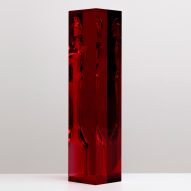 "We developed many samples, we were fine-tuning the colour and texture of the glass and are very proud to partner with Sir David Adjaye and bring to the 2019 Brit Award trophy a bit of Bohemian crystal beauty."

The design was overseen by Jason Iley, who is Brits chairman and CEO of Sony Music, and Alice Beal from Sony Music UK.

Iley also commissioned the previous two trophies: artist Anish Kapoor created a blocky red trophy with the Brittania figure trapped in its centre for last year's awards, while the late architect Zaha Hadid design a series of white, curved statuettes for the 2017 edition. 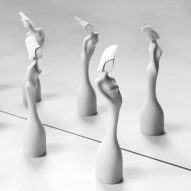 "David's treatment has surpassed my expectations, continuing the transformation of the award, as well as building on the legacy of outstanding creativity over the past few years," said Iley.

"Brit winners on the night will take home a truly stunning piece of work that's totally unique to them with each award carrying its own individual and distinctive imperfections," he added.

The awards will be handed out to all winners of this year's Brit Awards, which celebrate the best of British music.

The annual music awards take place on Wednesday 20 February at The O2 arena in London.