The Dutch architecture studio is revealing its design for the Lyric Theatre Complex for the first time at the Business of Design Conference in Hong Kong this week, although the building has been under construction since April.

Featuring a compact design intended to maximise visibility, the complex will contain the 1,450-seat Lyric theatre, the 600-seat Medium theatre, and the Studio theatre that seats 270.

There will also be a large rehearsal room and an eight-studio centre for the resident dance company, along with shops and restaurants.

Each theatre will have its own foyer, allowing all three to be open simultaneously. Each of these foyers will have balconies and overlooks, so theatre-goers and the public can enjoy what the architects described as a "see and be seen" atmosphere.

In an inversion of the traditionally enclosed "black box" theatre design, UNStudio put transparency at the core of the building. Large sections of the facade will be glazed to allow the public to see inside the building and watch the dancers rehearse.

The theatres will be stacked for compactness, connected by two ramps curving in a 3D figure-of-eight design. The first ramp will down to the Lyric theatre, while the second will ascend to the Medium and Studio theatres.

This central "spine" will run through the complex, acting as an "alleyway" connecting the Artists Square to the waterfront.

The three theatres will be differentiated by their own colour-coded palette, which will start at the foyers and build in intensity of hue as it reaches the auditorium.

Intended to evoke baroque-era grandeur, the Largest Lyric theatre will be coloured red and bronze, with contemporary touches added through brown and grey wooden accents. 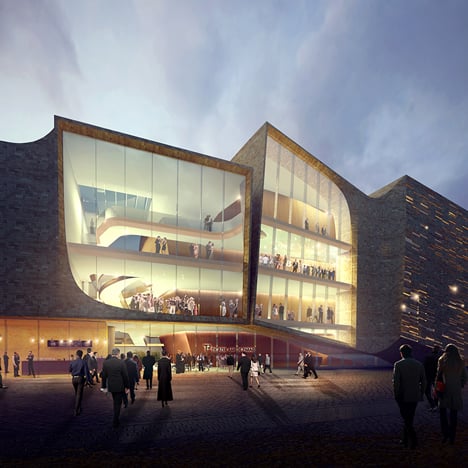 The Medium theatre will be decorated in deep purple with contrasting metal and walnut inlays, while the Studio theatre is to be realised in dark blue, in order to complement the smaller scale dramatic productions it will host.

In order to fit the site, the Lyric theatre will be situated 11 metres underground. The seating will be stacked asymmetrically to make the best of the space, but will arranged to appear symmetrical to the dancers from the stage.

This arrangement is necessary to preserve the acoustics for each venue, which is further complicated by the Airport Express Line running underneath the complex.

The Lyric Theatre Complex forms part of the Foster + Partners masterplan for the West Kowloon Cultural District – a vast new cultural district being built on reclaimed land on the waterfront.

The area will also soon be home to M+, a major new architecture and design museum designed by Herzog & de Meuron, and the Xiqu Centre, a centre for Chinese opera designed by Bing Thom and Ronald Lu.

"The constraints of the site for the Lyric Theatre Complex presented numerous fascinating challenges for the arrangement of the various programmes within this very compact building," said UNStudio co-founder Ben van Berkel.

"However, in the end we were able to create a vibrant building that celebrates the enchanting world of the theatre and will cater to the future needs of Hong Kong’s theatre-going public."

Renderings are by DBOX. 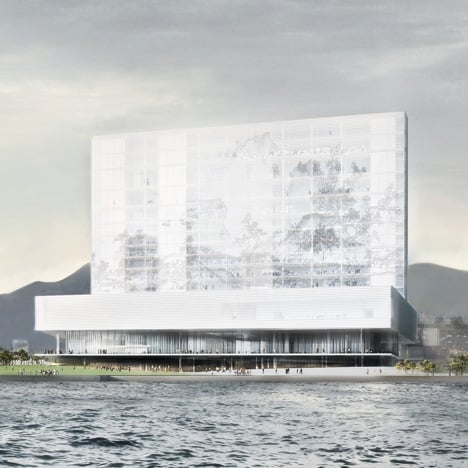