Herzog & de Meuron and Purcell combined conservation and adaptive reuse to preserve the city's former main police station, central magistracy, and prison, established by the British after they took control of the territory in 1841.

Most of the city's colonial architecture was not protected, and therefore bulldozed for redevelopment.

Herzog & de Meuron also added two new structures to the site, which was decommissioned and vacated in 2006, bringing the total number of buildings to 16. Overall, the transformation makes Tai Kwun the largest heritage conservation project in Hong Kong.

"What we have done in Hong Kong is to transform a former police station into a cultural centre," said Herzog & de Meuron. "In Hong Kong and also in Mainland China this is still a totally new approach to architecture – an unusual thing to do because normally old buildings and entire neighbourhoods are being removed and being replaced by new ones." 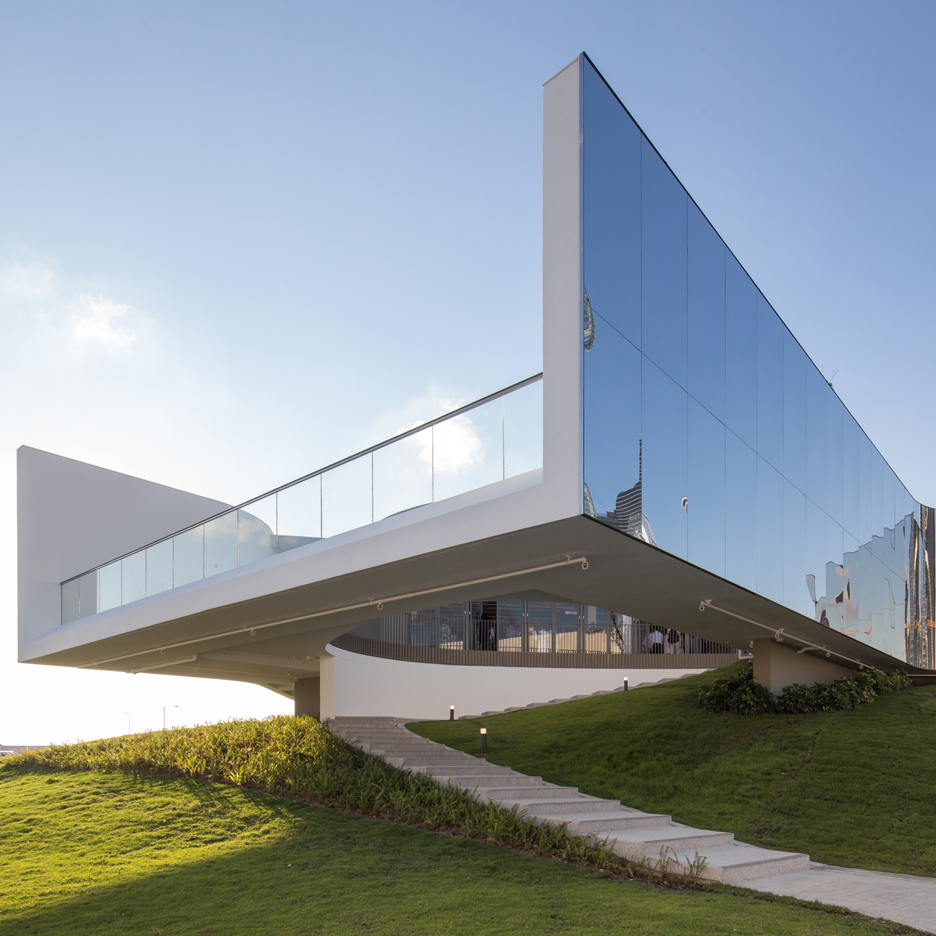 Tai Kwun is positioned on a corner lot and is walled-in with masonry structures along Hollywood Road and Chancery Lane. Their gabled roofs reflect a bygone era in the skyscraper-prevalent city.

Visitors walk through the main gates, past a series of former administrative buildings, and into the main plaza and former Victoria Prison. The prison now a museum that recounts its former use, with many of the cells in their original conditions.

As a whole, Tai Kwun arranged around two large courtyards: the Parade Ground and the Prison Yard. "From an urban perspective, the compound is a rare 'courtyard' in the middle of one of the densest cities in the world," Herzog & de Meuron said.

At the rear of the complex is a high masonry wall, which tops out at a sidewalk to reveal Hong Kong's towering cityscape. Here, the two new buildings by the firm have a contemporary design language that contrasts with the surrounding historic structures.

Both are square-shaped and clad with cast aluminium facades. The grid system takes cues to the bricks used elsewhere, but also serves as sun shading and rain protection in Hong Kong's subtropical climate.

On the southeast corner of Tai Kwun is a new wing on Arbuthnot Road, with a volume that hovers above the retaining wall to create a covered public outdoor space, with stairs that also serve as seating.

Across the way is a contemporary art museum with a restaurant on its top level. Inside is a strong concrete materiality, reflective of the prison cells nearby, and a concrete spiral staircase that spans the building.

Herzog & de Meuron is also working on another museum in Hong Kong – the M+ Museum in the Kowloon area – and has a wide portfolio of cultural projects globally, including the National Library of Israel and the Museum of the 20th Century in Berlin.

The studio's ability to turn decommissioned historic structures into impressive exhibition spaces was proven at the Tate Modern gallery in a former London power station, which also gained a contemporary addition in 2016.