David Adjaye has designed a faceted trophy made from Swarovski crystal for the winners of this year's Fashion Awards.

The British Fashion Council and event sponsor Swarovski commissioned the Ghanaian-British architect to create the bespoke trophy for the UK's annual Fashion Awards, taking place in London on 10 December.

Intended to "create beautiful and unexpected refractions", his design features a six-sided column with triangular facets that taper upwards.

Handcrafted from crystal by Swarovski craftsmen at the company's headquarters in Wattens, Austria, each trophy is relatively light, weighing approximately 1.4 kilograms (an Oscar is approximately 3.8 kilograms).

It is the second trophy designed by Adjaye that has been unveiled this week – he also developed this year's Brit Awards.

Adjaye said he hopes his Fashion Awards will "bring a certain magic and add to the celebrations on the night".

"Swarovski crystal was integral to the design as I was captivated by the optical effects that you can achieve through geometry, creating refraction, distortion and reflection with the material," he explained.

The bespoke trophies will be handed out in a ceremony at the Royal Albert Hall.

This year's nominations include Balenciaga, Burberry and Gucci for brand of the year, while Virgil Abloh and Alessandro Michele are among designers nominated for the designer of the year category.

"It is an honour to welcome Sir David Adjaye OBE as our latest prestigious design collaborator for the Fashion Awards," said Nadja Swarovski, a member of Swarovski's executive board. 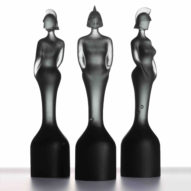 "Sir David's 2018 trophy captures the sparkling elegance and sophistication of these awards and celebrates the innovation, energy and creative spirit at the heart of this industry," she added.

Each year the British Fashion Council and Swarovski collaborate with a designer to create a special trophy for the awards. Past examples include Australian designer Marc Newson in 2016, and London-based architect John Pawson in 2017.