British architect Richard Rogers has won the top prize awarded by the American Institute of Architects, a choice backed by his peers Moshe Safdie, Renzo Piano and Deyan Sudjic.

The founding principal of Rogers Stirk Harbour + Partners has scooped 2019 AIA Gold Medal in recognition of his vast portfolio of major projects, from the Centre Pompidou arts centre in Paris to the recently completed Three World Trade Center skyscraper in New York City.

Rogers, 85, has received most of the industry's major awards during his five-decade-long career – including RIBA Royal Gold Medal in 1985, the Pritzker Architecture Prize in 2007, and the Stirling Prize in 2006 and 2009. The architect was also named a Praemium Architecture Laureate by the Japan Art Association in 2000, and was knighted by Queen Elizabeth II in 1991.

His missing AIA Gold Medal – which is awarded annually to architects in recognition of their legacy to the field – was described as an "oversight that needs to be remedied" in the AIA Committee on Design's letter supporting his nomination.

Architects Moshe Safdie and Renzo Piano also backed the architect, who known for his modern high-tech architectural design, but celebrated for his focus on social and civic impact – which he described as the architect's responsibility in an interview with Dezeen.

Rogers was "an environmentalist" before it was fashionable – Moshe Safdie

"He is the quintessential builder, committed to mastering the craft and technology of construction, harnessing it towards efficient buildings, and forging an expressive architectural language," said Israeli-Canadian architect Safdie in support of Rogers' Gold Medal nomination.

"Before it was fashionable, he was an environmentalist, who recognised early in his career the challenges of energy and climate, developing innovative solutions."

Piano, who worked with Rogers to design the Center Pompidou, echoed these thoughts in another statement, describing him as his "companion of adventures and life".

"He also happens to be a great architect, and much more than that," Piano added. "He is a planner attracted by the complexity of cities and the fragility of earth; a humanist curious about everything (from art to music, people, communities, and food); an inexhaustible explorer of the world. And there is one more thing he could be: a poet."

Rogers was born in Florence, Italy, in July 1933. He began his architecture education at London's Architectural Association and continued at Yale University in Connecticut. He set up Team 4 with fellow graduates Norman Foster – who is also another living giant of architecture – and Rogers' then wife Su Brumwell in 1963.

He is "curious about everything" – Renzo Piano

Like many famed architects, including Robert Venturi and Le Corbusier, one of his first projects was a house he and Brumwell designed for his parents in the late 1960s. Called Wimbledon house – or Rogers House – the residence was intended to demonstrate a new pre-fabricated construction system, which would enable homes to be built quickly and affordably.

Rogers said that the project failed to meet his ambition to solve the British housing problem, in an exclusive interview with Dezeen.

However, it was Paris' Centre Pompidou, which he and Piano were contracted to design in the early 1970s, that propelled him into the spotlight. 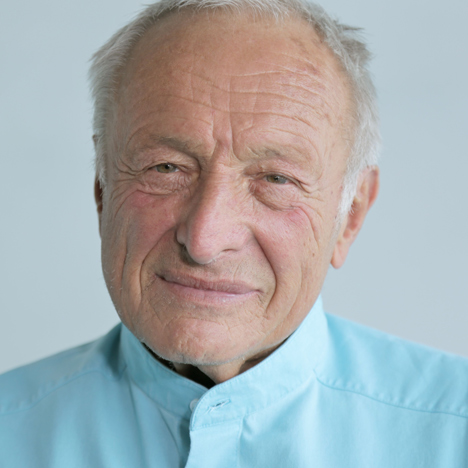 "We have a responsibility to society" says Richard Rogers

In a video interview with Dezeen, Rogers explained that the building – recognisable for its inside-out design – was influenced by the "highly active period of politics" in Paris during the 1960s, when protesting students and workers came close to overthrowing the government in 1968.

Three World Trade Center in Manhattan, London's Leadenhall Building – also known as the Cheesegrater – and the Madrid-Barajas Airport are among his best-known works.

Rogers is also an influential force in developing urban strategies remodelling major cities, with plans developed for both Barcelona and London.

In 2001, he was appointed by London's mayor at the time, Ken Livingstone, to act as chief advisor on architecture and urbanism. The role continued under Livingstone's successor Boris Johnson, helping to provide a plan for the city post the 2012 Olympics.

"Rogers has consistently campaigned for compact, high density cities that celebrate the quality of urbanity, and encourage their ability to support street life, social diversity, and high quality public transport," said Deyan Sudjic, director of the London Design Museum, in another statement.

"It's a stance based as much on an idea of what the city can be in anaesthetic and social sense, as it is on sustainability."

Rogers maintains his prominent position in the architecture industry, wading in on recent debates regarding the impact of Brexit negotiations and staff cuts at the Architectural Association.

"And today we celebrate Richard Rogers, a humanist who reminds us that architecture is the most social of arts," he added. "Throughout his long, innovative careers, Rogers shows us that, perhaps, the architect's most lasting role is that of a good citizen of the world."

The AIA Gold Medal is awarded annually to architects in recognition of their legacy to the field. Rogers is the 75th recipient of the prize, following major names that include Frank Lloyd Wright, Louis Sullivan, Le Corbusier, Louis I Kahn, I M Pei, Thom Mayne and Moshe Safdie.

This year's winner was James Polshek, while the year previously the award was given to Paul Revere Williams, who became the first black architect to receive the medal. In 2016, the winners were husband-and-wife team Denise Scott Brown and late Robert Venturi.

Portrait of Richard Rogers is by Dezeen.