Schimmel and Schweikle's Return To Default features three chairs, each based on a standard office chair that has been stretched, expanded or multiplied to create a new form.

A desk chair is stretched to become a three-seater sofa, a conference chair becomes an overstuffed armchair and office stools are combined to create a giant lounge chair.

The designs are the result of the duo's experiments with manipulating generic forms using 3D software.

"In the 3D software you are not bound to the laws of physics, therefore a whole new shape language appears. Every shape can be manipulated drastically," the designers told Dezeen. "We were inspired by these possibilities and wanted to prove their relevance by materialising them."

"For us the office appeared to be one place where a lot of archetypical designs can be found and because of that the office space often is seen as a visually dry landscape," they said.

"The office chairs have become an icon for routine and efficiency. By playing with these icons and stretching their function we want to break the monotonous landscape of the office floor."

The designers used a variety of manufacturing techniques to realise their digital creation in real life. Most of the structure of each of the three chairs was made from 3D-printed plastic, which was then upholstered or coated to mimic the finish and materials of real office chairs.

Moreno Schweikle is originally from Germany and Janne Schimmel from The Netherlands. The two met during their studies at Design Academy Eindhoven and decided to launch a studio together, alongside their individual studios. They share an interest in reinventing archetypal objects that are often ignored in daily life. 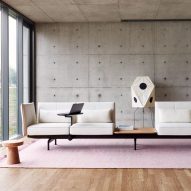 "In a way [Return To Default] is a homage to all the hours of work that was put into creating these archetypes," said the designers. "Building on something that is already there is a much more economic approach than wasting time on demolishing and building up again."

"Even the big industries are realising that the environment that people work in has a huge impact on their wellbeing and therefore on the quality of the work they do," they added.

"We believe that one huge aspect of creating a more healthy environment is to have a space where the mind is triggered by the objects that make up that space."

Return To Default was a shared graduation project. It was displayed at the Design Academy Eindhoven show during Dutch Design Week in October, where Geoffrey Pascal also showed his furniture for laptop-based workers who are desk-shy and bed-happy.

Major office furniture producers have been responding to the changing focus on health and wellbeing in the workplace in recent years by creating furniture that emulates less rigid environments such as the home.

Last month, leading designers told Dezeen that "the desk has had its day" and the future of the workplace was in more flexible, relaxing designs, such as sofas with integrated power points.

Photography is by Femke Reijerman.