Geoffrey Pascal has created a collection of office furniture that responds to the growing number of people working at home in their beds.

The three pieces in Pascal's Grafeiphobia: Unexpected Office collection are each based on the frame of a basic, slatted wooden bed. Different adaptations and foam upholstery allow the user to work in positions that emulate being in bed but also support the body in NASA's Neutral Body Position.

Developed to promote health in astronauts in zero-gravity, the Neutral Body Position spreads the user's weight over multiple points across the body. This contrasts with the typical seated desk position, which concentrates force downwards on the lower back.

Pascal began working on the idea during his studies at Design Academy Eindhoven after analysing his own difficulties working at a desk and after reading about a growing number of people that are working at home in their beds.

The name Grefeiophobia relates to a fear of desks.

"When I am working behind a desk sitting on chair, I always have the feeling of being forced to work, that I have to get it done. I feel stress and pressure, which doesn’t make me more productive, it is rather the opposite," explained Pascal.

"I decided to experiment on myself and to work in bed everyday," he told Dezeen. "And it is true that when lying down in bed your relation with work changes, you have more comfort, the aspect of time changes too, you become less stressed and more focused."

Pascal also researched the negative aspects of working in bed.

"Staying there the entire day isn't so good," he said. "It is not recommended to mix sleeping and working environment and also in terms of hygiene it is not so nice. I decide to extract the positive elements from working in bed and try to reapply them elsewhere." 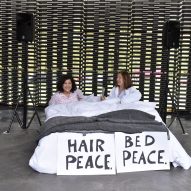 The designer used various densities of foam, provided by Recticel, a company that specialises in mattresses, to experiment with different positions that are common when lying in bed.

The three pieces in his collection could be used in a traditional office environment as well as by home workers.

The Basic Besk was inspired by sitting in bed with a laptop on the lap. It consists of three modules – a three-part back rest, a seat and a foot rest, which also doubles as a small storage box. A small rectangle cushion, a large rectangle cushion and a round bolster provide the back support.

The separate pieces mean the design can be adjusted for people of different heights and with different leg lengths. Pascal recommends this furniture for long tasks of up to three hours.

The Triclinium Gum is based on a side-lying position, with a sloping frame supporting a mattress and an additional cushion for placing between the legs for comfort.

Further cushions can be added using straps to allow the furniture to be used in different ways and a complimentary design called Popsicle can be used as a laptop stand or standing support. This design is intended for tasks that take between five and 30 minutes.

Finally, The Flying Man is based on lying on the front and consists of three pieces – one for the lower legs, one for the torso and a laptop desk that has a reversible top so it can also be used as an upholstered stool.

The leg and chest support can also be used as a more conventions seat and desk. This design is for tasks of up to one hour, and for the end of the day when workers feel more tired, according to Pascal.

"What is important is the idea of movement, to go from one furniture to another, not to stay static and to find the right pieces according to the job that need to be done," said the designer.

"By doing so the worker isn’t getting as tired and bored as if he would have stay on a chair. He can work for a longer time but in more welcoming, playful and comfortable environment."

The dome-shaped and flat cushions on the pieces are upholstered in vibrant colours and with two types of fabric by manufacturer Febrik.

Grafeiophobia was on display at the Design Academy Eindhoven Graduate Show 2018 during Dutch Design Week in October, alongside other graduate projects including a portable yellow toilet for women.

It is one of many projects exploring the death of the desk, in response to the growing number of nomadic workers, changing expectations from employees and recent evidence that extended periods of sitting can be unhealthy.

At this year's Orgatec furniture fair, Edward Barber and Jay Osgerby unveiled a modular seating system that doubles as a workstation, while Swedish company Blå Station launched seating that can be customised with surfaces and power points.