London-based agency Ask Us For Ideas (AUFI) enlisted 12 design studios to create sustainable wrapping that would be "as at home framed on a wall as wrapped around a gift."

Streaky bacon, abstract weather patterns and twisted typography feature in the designs, which have all been printed on fully recyclable paper.

"Unlike a puppy, Christmas wrapping paper is just for Christmas, so we wanted to make it disposable but stylish as hell," said AUFI co-founder Nick Bell.

"A handful of the world’s best agencies have created a set of 12 papers that, because of the exquisite paper stocks and hand-printed craft, are more like limited edition prints than wrapping paper," he continued.

International studio Base Design chose to make a satirical comment on the nature of social media channels such as Instagram with their wrap design, which reads "So Many Likes – When all you Need is Love". 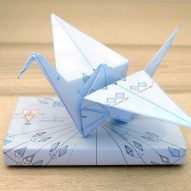 Money raised from sales will go towards the Wrap Up London campaign run by charity Hands On London, which works to keep homeless and vulnerable people in London clothed and warm over the winter season.

"The winter months are an extremely difficult time for London’s most vulnerable people," said Jon Meech from Hands On London. "The Wrapping Up project is an ingenious way of providing invaluable support to people who need it in the capital this Christmas."

With a lot of wrapping paper being single-use and therefore not recyclable, Christmas-time produces huge amounts of waste. AUFI therefore wanted to do something "playful but powerful" with this festive novelty by printing its designs on fully recyclable G F Smith Colorplan paper.

Other designs include a pink and red streaky repeat bacon pattern by London based agency Don't Panic Partners, which is a nod to the "pigs in blankets" – sausages wrapped with bacon – served at Christmas dinners.

"From pigs in blankets to Christmas presents, everything is better wrapped up at Christmas," said Don't Panic co-founder Mark Whiteway. "This includes people too, which the charity Wrapped Up focuses on."

London-based design agency A Practice For Everyday Life covered its wrapping paper in "This Way Up" arrow symbols found on parcels. According to the studio the arrows represent trees, which it used to map out the areas where our Christmas trees are sources from.

An exclusive run of 200 of the 12 bespoke designs went on sale on 29 November, and can be purchased via the initiative's website.

Portland-based design studio Ilovehandles also got creative with wrapping paper, designing wrap that is printed with folding instructions so that it can be reused to make origami figures.

When a gift is unwrapped, the paper can be folded along geometric lines to create a paper object, avoiding both the mess and waste associated with ripping the paper off presents.