Land Rover unveiled its new Range Rover Evoque car in London last month. It is an update to the compact sports-utility vehicle (SUV) that the British car brand launched to great commercial success in 2011.

The new version features a palette of new exterior and interior materials, including a range of premium non-leather options for the interior of the car.

"We have traditional leather options, as many of our customers would expect," says Land Rover chief designer of colour and materials Frascella in the movie, which Dezeen filmed for Land Rover at its headquarters near Coventry.

"But we've also designed and developed what we like to call 'materiality options'. So non-leather, premium alternatives."

The new animal-friendly materials reflect an increased demand from high-end consumers for more ethical and sustainable products, according to Frascella.

"The landscape has been shifting quite quickly in the luxury market," she explains.

"People want to understand more about what they are purchasing – how it's made and where is comes from. We need to be cognisant of this and offer choices that reflect customers' values."

One of the new materials is a wool-polyester blend, which Land Rover developed with Danish textile company Kvadrat.

"Kvadrat is Europe's leading manufacturer of premium textiles, known for working with the tastemakers of our time, so it really was a great fit for us to work together," Frascella says.

The Kvadrat textile, which comprises 30 per cent wool and 70 per cent polyester, is available in grey or white. It is paired with a synthetic suede cloth called Ebony by Miko in the seats of the car. 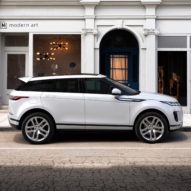 The other alternative leather material is called Eucalyptus Melange, a hybrid plant-based material developed by Land Rover, which is paired with an animal-free, anti-microbial polyurethane material in the seats.

"The Eucalyptus Melange is 30 per cent tensile fibres, which are derived from eucalyptus bark, and the other 70 per cent is polyester," Frascella explains.

Both non-leather upholstery options have been designed to be as hard-wearing as the leather options, Frascella claims.

"They are very durable, have retained newness, and they are also cleanable," she says.

The car can be ordered in new white, grey and silver exterior finishes, which feature a subtle pearlescent effect.

"For the exterior palette, we wanted to make the colours a bit more nuanced and sophisticated," Frascella says.

"They look fairly neutral, but when you look at them in different lights the colours shift and you really see them come to life."

The Range Rover Evoque is the smallest and fastest-selling member of the Range Roger family. It sits below the slightly larger Range Rover Velar, which the World Car Awards named as "the most beautiful car on the planet" in April 2018.

In an exclusive video interview with Dezeen, Land Rover's chief design officer Gerry McGovern describes the new Evoque as an example of "reductive design". He claims all the surfaces used in the car are "more sophisticated and refined".

Last year Land Rover unveiled a drone-equipped Discovery to be used for search and rescue operations, while earlier this year the company launched a rugged smartphone aimed at outdoor enthusiasts.

This movie was filmed by Dezeen for Land Rover. Additional footage in the video and all the images in this story are courtesy of Land Rover.