The impossible geometries of Dutch graphic artist MC Escher are explored by Oki Sato's studio Nendo in an exhibition open at the National Gallery of Victoria in Melbourne.

The exhibition, called Between Two Worlds, includes 157 prints and drawings by Escher, made between 1916 and 1969, taken from the largest collection of the artist's work, at the Gemeentemuseum in The Hague.

The Japanese studio has designed an immersive monochrome design for the exhibition that draws on the artist's work by playing with themes of geometry and space.

The studio took the simple shape of a house as the basis of its designs for the project, adapting the form into different dimensions and scales. The house was chosen as it is a symbol that represents space.

The house motif has practical and conceptual applications, with variations on the shape forming seating, providing a context for display and directing visitors. Birds, fish and other frequently recurring animals in Escher's work are used to explain the concepts behind the exhibition and as a 3D navigational tool.

The exhibition is arranged according to themes rather than chronologically, over nine display areas, each designed to provide a fitting backdrop for the specific exhibits.

The opening space features a 17-metre-long corridor with an animation projected onto the floor that leads visitors to the first gallery. Here a long white bench that looks as though its made up of interlocking houses provides a seating area, where visitors can look at Escher's early work.

In the next room, a pattern of house shapes has been laid on the floor of a symmetrically designed gallery space, themed around reflections and refractions, such as Eye, from 1946.

Further on, a three-metre staircase raises visitors to a viewing deck that looks down on a 60-metre-long and six-metre-high gallery, from where they look down on a row of four black houses that investigate Escher's subject of "the regular division of the plane".

The roofs of these houses gradually open up the further away from the viewing gallery, until they become a row of five white houses at the back of the room. Various works are displayed amongst them, where visitors can walk around and discover them.

In the next room black metal pipes holding Escher works appear to float in space. Visitors can walk around the gallery and when viewed from certain angles, the black pipes form the outline of a house.

This area is dedicated to Escher's work that explores extreme perspectives and optical illusions.

Visitors can experience an optical illusion for themselves, in a 21-metre corridor with an entrance almost four metres high and a back wall just 50 centimetres tall. The designers have used contrasting colour to further emphasise the change in perspective.

A 3D house pattern made from a thin metal sheet becomes the backdrop for a projected animation to explore the idea of geometrical beauty.

Further on, a huge chandelier hangs in the middle of a circular gallery. It is made of more than 55,000 small flat black and white houses, and has 17 pieces of art displayed around them that all relate to the idea of reflections and geometric forms. 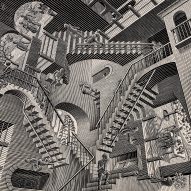 Nendo has also created a snaking white path that cuts through a black room, with raised sides so that visitors are sunk below the walkway. The curves of the path are based on even angles and tangency, which refer back to Escher's aesthetic principles. The artist's Snakes work of 1969 is exhibited here.

Nendo previously collaborated on the exhibition furniture for the Eye of Gyre gallery in Tokyo, where they traced the existing surfaces of the gallery with a black line that formed the display of the work. The lines gave the illusion of being drawn onto the space.

Exhibition photography is by Takumi Ota