Studio Cadena, which is based in both Brooklyn and Bogotá, designed Masa on a corner plot in a northern residential neighbourhood of the Colombian capital.

The bakery features "monolithic" cast in-situ concrete walls detailed with ridges both inside and out, drawing a contrast to the red-brick paved street outside.

"The idea was to figure out a way to make a wall that – with minimal effort – would serve as an envelope, be the structure, and give the building its character," studio founder Benjamin Cadena told Dezeen.

"From the outside, the texture changes dramatically throughout the day depending of the shadows being cast by the sun, while on the inside, it provides a more tactile scale while diffusing sound."

Different-sized triangular windows cut into the concrete to open up views between inside and out. Because the shape of the openings narrows to the top, the studio was able to create larger openings free of structural supports.

"The triangles introduced a way to both create a more distinct and memorable figure, while maximising openness to the street at ground level," said Cadena. "They also allowed us to have a mullion-less window by reducing the glazing and spans on the upper portions, where we were unable to support the glass directly ground."

A large circular window also punctures the rear of Masa to offer views between the kitchen and a patio, where customers can sit and enjoy baked goods and hot drinks. 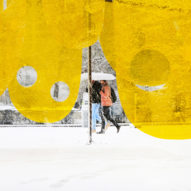 Circle motifs continue inside, as large spots across the terrazzo flooring, mirrors on the walls, and globe paper lanterns that hang over cafe seating. These details chime in with the playful style of Studio Cadena's holiday installation in New York City, which is shaped to resemble smiley faces.

At Masa, round openings are also cut into tiered wooden furniture to create openings for plants to grow up, with strips of metal mesh hand-painted in orange hues drooping above.

Placed towards the front of the shop, this stepped seating is among a series of furnishings that Studio Cadena inserted to divide the space into different areas.

"The idea is that everything is connected, but the spaces remain fragmented for intimacy," said Cadena.

"In any space in the restaurant you might hear or smell things that give a sense of the adjacent spaces, but it isn’t completely open," he continued. "The design defines distinct spatial volumes yet allows you to move through them with the freedom of an open plan."

Pastries and cakes are displayed on the concrete counter built behind the wooden seating.

The service area fronts a wooden pegboard wall, which forms a display case for breads and Masa merchandise, while drinks are served from a curved concrete island.

Seating ranges from casual setups of wooden benches and stools, to circular tables for groups, interspersed with concrete planters.

Masa is the larger, second outpost of the city bakery of the same name, which was founded by sisters Silvana and Mariana Villegas. The first opened in 2011 and was also designed by Studio Cadena.

Bogotá, which is both Colombia's capital and largest city, is full of impressive architectural sites. Graphic designer Camilo Monzón Navas used a drone to capture many of these, including several by Rogelio Salmona – regarded as one of Colombia's most important 20th-century architects.

Photography is by Naho Kubota, unless stated otherwise. 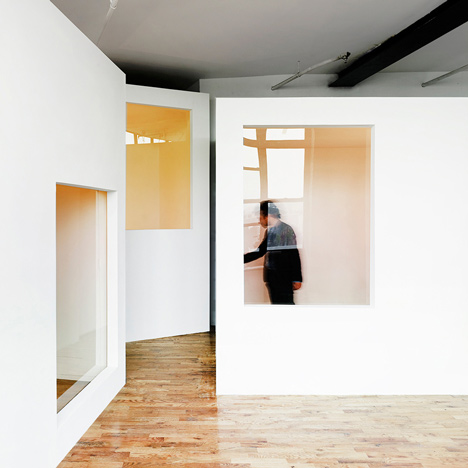