French designer Loïc Bard has crafted a set of wooden furniture and matching tableware, all with rounded edges "inspired by the sense of touch and the human body".

Bard, a woodworker and designer now based in Montreal, created the Bone collection of benches, stools, chairs, tables and utensils from Canadian maple.

The pieces are hand-sculpted with chunky, rounded elements. Some are blackened with a blowtorch, while others are bleached, with milky veins resembling human skin.

Bard told Dezeen that the collection is "inspired by the sense of touch and the human body".

"The starkness of the two tones (black and white) is tempered through the veined details of the natural material, and the sensual anatomy of the shapes sculpted from a single piece of wood," he said.

First, the designer drew freehand sketches before carving the unscripted shapes by hand.

"I tend to create minimalist and pure shapes by drawing sketches at first and incorporate some of my personal emotion in the conception of the objects, something more sensual," he said.

Bard then used the Japanese technique of shou sugi ban for the blacking effect, and finished the designs in a natural oil for a dark matte look.

His Bone 01 and 02 chairs both have three legs and narrow backs, with either rectangular or tubular constructions.

Also in the series, a black dining table has round legs and little crevices on top for arranging and placing items.

Some of the stools are more round and chunky, while others are ultra-thin, with hollow cores or legs that extend up past the seat, evocative of a spinal column.

"The analogy to the human body can be felt as soon as these silhouettes are perceived, outlined by a compact skeletal structure in the case of the chairs, an assembly of rounded scapulae for the stools, or through large limbs with soft knee joints for the benches," said Bard.

The designer grew up working in a small wood workshop in a village in France, where he first learned his craft. "My childhood on the family farm and the freedom to experience nature are the sources of the organic shapes of my objects," he said. 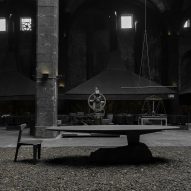 He then went on to study wooden furniture craft in Montreal, where he discovered Canadian maple. "I particularly appreciate it because of its hardness and very light colour that I try to keep in my projects," Bard said of the material.

In addition to the Bone furniture, Bard has also created limited-edition utensils, launched with Montreal design collective Souk at SAT (the Society for Arts and Technology).

The tableware is similarly made of scorched maple. Comprising dozens of shapes, most have flat rounded areas and thin rodded ends. Some are narrow and rectangular, while others are more bulbous or even hourglass-shaped.

Photography is by Loïc Bard.