The Cork Studio, a garden building made almost entirely out of cork, has been constructed by Studio Bark as a building prototype that can be completely recycled, reused or composted.

To challenge the architecture industry's dependence on "unhealthy single-use materials", London-based architects  Studio Bark sought to demonstrate how one eco-friendly material can could be used to form an entire building envelope.

"As a society we waste a huge amount of time, energy and resources in decorating, redecorating, demolishing and rebuilding parts of our buildings, using unhealthy single-use materials," said the architect.

"We built the Cork Studio to show that there is an alternative."

Following a series of experiments that tested water, fire and degradation resistance, Studio Bark chose to work with cork – a strong, durable material that is sustainably harvested directly from the bark of the cork oak tree.

"All of the elements in this solid cork building can be disassembled at the end of their useful life, and the individual components are either fully biodegradable or recyclable," continued the studio.

The Cork Studio was constructed using discarded granules from a wine cork manufacturer.

The granules were turned into solid blocks through a heating process, which triggers them to expand and release a natural resin that binds them together. Following this the blocks were cut into desired slab sizes, and joined on site.

"There is no cladding, rainscreen, cavity, plaster or paint, ground floor slab or foundation. Just a single thickness of cork, which carries out all the necessary functions of structure, waterproofing, acoustic, fire, airtightness and aesthetics," explained the architect.

Chosen for its high thermal property, a low density cork is used for the floor slabs. Combined with the material's waterproof qualities, this negated the need for concrete screed or a damp proof membrane.

The same type of cork has been used to create a flat roof, supported with a series of timber joists that help stiffen its structure. 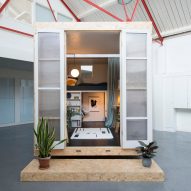 To provide better resistance against lateral loads like wind, the walls of the Cork Studio are constructed using higher density slabs that are fitted together with recyclable insulation screws.

Throughout the studio every surface has a natural finish, without any toxic varnishes, meaning each part can be easily recycled after the building's life.

A Sycamore tree that was already growing on the site has been incorporated into the building, as the lightness of the structure allowed Studio Bark to build on top of its roots without damaging the tree.

At ceiling level, it is enclosed by a rubber gasket that allows water to trickle down the tree so it can "self-water", while keeping out heavy rain.

The Cork Studio has recyclable polycarbonate windows, a plywood door and internal sliding shutters, which act as an additional buffer against temperature, while controlling light levels.

Studio Bark built the envelope for under £500 per square metre, and claim the structure could easily built by two people in two days, and fitted out and inhabited within seven.

The Cork Studio is not Studio Bark's first sustainable prototype. In 2017 it developed a micro-home as part of an initiative called The SHED Project, which aims to provide an alternative to property guardianship, where people pay very little rent to live in abandoned buildings.

The prototype allows easy assembly in just one day using a mallet and a drill, and can also be disassembled, transported to another location and rebuilt.

Photography is by Lenny Codd.