Called Acid Brexit, the three-track album and video is a collaboration between Suzuki, fellow Pentagram partner Luke Powell and his brother Jody Hudson-Powell.

The album cover has a European flag with an upside down, yellow smiley face in the place of one of its stars. A disorientating short video accompanies the record, featuring an oversized smiley dancing across Westminster bridge in London.

Video intended as a tool for protest

The video, created by the Powell brothers, references the flashing graphics and DIY attitude of early acid house videos in the late 1980s and 1990s. It is completed with a blurred vignette that distorts the outer corners of the video, intended to evoke an acid trip.

Intended as a tool for protest, to be played at "mashups, house parties, and everything else in between", the album features samples of interviews with Nigel Farage, Boris Johnson and Theresa May – all British politicians involved in the Brexit campaign or negotiations – to a backdrop of squelchy acid house beats.

"I am an immigrant to the UK. My work started on this project last year, propelled by my frustration towards the anxiety and pressure placed on immigrants by government actions," said Suzuki, whose other music-related projects include a set of singing musical appliances and a sound modifying installation in Atlanta. 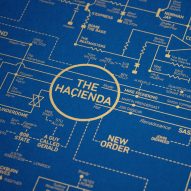 Dorothy's poster maps out the history of UK club culture

"I am increasingly inspired by the creative industry's response to Brexit and the satirisation of the Conservative Party's agenda. Acid house music is protest music," he explained.

Response to Suzuki's issues with immigration

Suzuki, who was recently appointed a partner at Pentagram, chose to embark on the project after experiencing first-hand the effects of Brexit on visa limitations and travelling in and out the UK.

"I've lived in the UK for 14 years and pay my taxes here. Yet as an immigrant, I've experienced so many problems due to increasingly strict policies. Even though these aren't exclusively tied to Brexit, it is all part of the same rhetoric towards those that come in from the outside," he said.

Each track on the album can be downloaded for free on Soundcloud and sampled or edited to suit an individual's needs.

"The songs may be posted anywhere and used in any way," he told Dezeen. "I really believe in the power of creativity as a force for inspiration and change."

The smiley symbol was originally created by graphic designer Harvey Ross Ball in 1963 as a symbol for the State Mutual Life Assurance Company in Massachusetts.

It was later adopted by the acid house scene in London in the late 1980s and became ubiquitous with England's second summer of love and the drug-fuelled, warehouse raves of the era. It was frequently spotted on merchandise like T-shirts and necklaces.

Earlier this year, graphic designer Rick Banks compiled three decade's worth of nightclub graphics into a new book, in a similar attempt to document club culture.

Similar projects include Dorothy's poster that illustrates the history of dance music culture using visual cues that reference the circuit diagram of a bass synthesiser.