Vo Trong Nghia's architecture studio has filled the interiors of a house in Ho Chi Minh City, Vietnam, with plants and trees to maximise its connection with a neighbouring park.

The project aims to reintroduce green spaces into the country's increasingly high-density urban areas, and tackle the resulting environmental problems such as urban flooding, overheating and air pollution.

"It is a rare opportunity to get a site in Ho Chi Minh city, which is adjacent to a green public space," said the studio.

"We therefore focused on designing a house which becomes an extension of its environment by integrating the green of the park into the interior space of the house. It gives a feeling of continuity of the park, to all three floors of the building, and creates an environment similar to a forest, despite being indoors."

Stepping Park House is centred around a large void that cuts diagonally through three floors of the building. It is enclosed by large windows that are faced by an ivy-covered metal grid.

It hosts a series of interconnected common spaces, including a ground floor living room that opens out to the park, and a family room on the top floor that leads onto a roof terrace.

Each of these spaces are fitted out with an abundance of trees and plants, which are incorporated into pebble-lined panels in the floor.

The void also serves a functional purpose, facilitating natural ventilation, providing natural light, and enclosing all of the building's circulation – including a discreet staircase the leads down to a hidden basement. 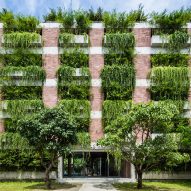 "Walking through the space, one will feel the wind moving from the living room to the top floor of the house, while the green facade eases the intense sunshine of the tropical climate. The model is a precedent for housing in tropical climates," added the architects.

Flanking the void are a series of solid volumes, which comprise the house's private rooms, including three bedrooms and bathrooms.

Each room features deep set windows and doors, which are fronted by trees that block direct sunlight and cool the wind, while also providing privacy and "brightening up" the spaces.

The interiors are fitted with wooden furnishings and ceilings that complement the house's natural aesthetic. Structural concrete elements are clad in a local white stone, or left with an exposed board-marked finish that lighten their visual impact.

Niches throughout the house are fitted with bespoke, fixed furniture pieces by Vo Trong Nghia, including in the family room where wooden louvres on the ceiling extend down to form a desk.

The house is enclosed by a series of small gardens that lead out into the park, and help to disguise a parking space set back into the ground floor of the house.

Stepping Park House adopts a similar aesthetic to a number of plant-filled houses designed as part of Vo Trong Nghia Architects House for Trees scheme. Its Stacked Planters House features a series of punctured concrete slabs that allow trees to reach up through its floors, and the slender Bamboo House's facade is covered in huge, grooved concrete planters.