Chilean architecture office Hsu Gabriel Architects has completed a holiday home comprising a pair of timber-clad volumes, which are angled to make the most of the views towards a nearby lake.

The studio headed by architects Ian Hsü and Gabriel Rudolphy designed Split House as a second home for a family, who wanted separate spaces for the parents and their children.

The building is situated on the shores of Lake Rupanco in Chile's Los Lagos region, on a forested site with views towards the Osorno volcano.

The separation of the property into two distinct masses was a response to the need for segregation and the characteristics of the site.

"The proposed solution was two different volumes, for the adults and the youth," the architects said. "These are connected by a gallery that also provides the main access to the house."

Another important criteria of the brief was that all living spaces should have views towards the lake and the volcano.

The narrow footprint of the plot did not allow both volumes to be positioned parallel to the water, so the architects separated and offset them in such a way that their vantages are unimpeded.

Both structures have a simple rectangular floor plan and two storeys, topped with folded roofs defined by ridges that runs from corner to corner. 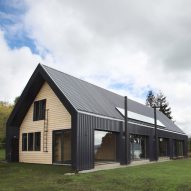 The architects claimed that the geometric forms are a direct result of wrapping the internal spaces within the smallest possible external surface area.

The same corrugated metal used for the roofs of the main volumes also covers the cranked gallery that connects them, which contains the entrance.

This entryway leads straight into a lounge on the ground floor of the children's wing, and connects with a double-height circulation space at the centre of the larger volume.

The living areas in both blocks open onto decked terraces immersed in the woodland, with large glazed surfaces enhancing the connection between the internal and external spaces.

The steeply pitched roof of the adults' wing encloses a master bedroom suite on the upper storey, while a pair of mirrored en-suite bedrooms are accommodated on the first floor of the smaller volume.

A timber framework was chosen as the most suitable method of construction, as it could be assembled by local contractors and was straightforward to transport to a site that has limited access.

The structure is lined internally with timber that wraps across the ceilings and onto some of the walls, introducing a warmth and grain that complements the natural setting.

The wood also extends beyond the glazed facades onto the underside of the eaves, which helps to enhance the sense of continuity between the living spaces and the terraces.

Gabriel Rudolphy previously worked with fellow Chilean architect Alejandro Soffia on projects including a house made from prefabricated timber modules, and a seaside guesthouse built using standardised materials to keep the costs as low as possible.