Emeren's Ornament Now: Cake Vases are created by applying slip clay to a rotating cylinder of papier-mache using a piping bag, similar to those used in pastry making and cake decorating.

Each vase is then fired and glazed to create a glossy, brightly coloured finish. The process means that every vessel has a unique shape.

The production method is based on the tradition of making Spettekaka, which translates as spit-cake, a traditional confection from Emeren's homeland of Sweden.

The cake is made by baking batter around a dowel used for spinning. A similar technique can also be found in traditional cakes in other European countries like France and Poland.

"I grew up in the countryside where folk culture plays a big role, but as a designer I felt a lack of contemporary influences," said Emeren.

"While researching folk art today, I found interest in the DIY movement, domestic crafts and baking as a modern day response to historical folk art. Both in DIY and folk art, decoration is very important, both in a symbolic way but also as a way to make things beautiful."

Emeren developed the technique with help from technicians at the European Ceramic Workcentre in Oisterwijk while studying on the contextual design masters at Design Academy Eindhoven.

The bright glazes are a reference to the artificial colours often used for decorating modern cakes, like cupcakes and birthday cakes. 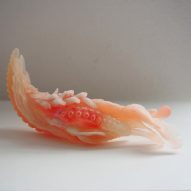 In places the glaze is intentionally thick to almost hide the structure of the object. Emren's aim was to celebrate the decorative qualities of the objects, rather than design functional pieces.

"I spent hours and hours watching cake videos on Instagram," she told Dezeen. "The process is a bit twisted, the outcome is an exaggeration of the cake process, which results in funky ceramics."

"There is this notion that folk art is supposed to be regional, but in the world of food, we can see how it has often worked as a cultural exchange," explained Emeren.

"In my work I hope to contribute to a language in objects, which extends beyond national borders. Cakes are fun and joyous, it is something meant to be shared."

Ornament Now: Cake Vases was Emeren's graduation project and was on show during Dutch Design Week at the DAE Graduate Show, which this year relocated to the Campina Milk Factory in Eindhoven.

Other projects on show included a yellow portable toilet for women and a proposal to combine synthetic biology with traditional Chinese medicine to help combat the trade in endangered animal parts.