Designers need to think of bigger, more ambitious solutions to the world's problems, according to speakers at Dezeen's talk about design in the anthropocene era during Dutch Design Week.

Discussing how design can help ensure the survival of life on earth, panellists called for more imaginative ideas and fewer small-scale experiments.

"We need disciplines working together"

The talk was part of Dezeen's Good Design for a Bad World series, which examines how design can help solve some of the big problems the world faces.

Essaïdi said that big ideas such as Elon Musk's plans to colonise Mars were needed to help bring about realistic solutions to problems here on Earth.

"At first you have to think about the rockets to Mars before you can apply them here," she said. "It's a dream, an escape, but maybe you find aspects you can use here [on earth]."

"We need disciplines working together," said geologist Sjoerd Kluiving, who is an expert on the anthropocene.

Anthropocene is result of "the great acceleration"

While it is not yet fully accepted by science, the term "anthropocene" is beginning to be used to describe a new geological era in which humans "are creating much more stress on the earth's surface and atmosphere than all natural processes combined," according to Kluiving.

Kluiving – an expert on the anthropocene, who is assistant professor in landscape archaeology at Vrije Universiteit Amsterdam – explained that this is the result of "the great acceleration", a period starting just after the second world war when resource consumption and pollution leapt dramatically.

He cited the work of Swedish environmental scientist Johan Rockström, who identified nine "planetary boundaries" that need to be maintained to enable life on earth. Three of these boundaries – climate change, biodiversity and nitrogen concentration in the oceans – have already been exceeded.

Kluiving added that designers, scientists and others urgently needed to work together to usher in an alternative era called the "sustainocene". 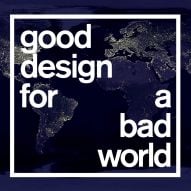 "The sustainocene is the sort of long, geological timeframe in which we people live in harmony with our earth system, and have sustainable solutions for the society in which we're living," Kluiving explained.

"Resentment needs to be managed"

Rab Messina, a design journalist from the Dominican Republic, pointed out that global inequality could impede the likelihood of all humanity working together to address the issues.

People in developing nations in the southern hemisphere aspire to the same lifestyles as their northern counterparts, she said, and don't appreciate being told they have to make sacrifices that others did not have to make.

"It's what I call the piñata problem," she said. "There was a party and the west filled the piñata with candy, using our resources. It ate up all of the candy."

Now environmentalists from the industrialised north are telling people in the south that they can finally join the party but there is no candy left, Messina argued.

"We got late to the party, and now you're selling us sustainability. We did not get to pollute and enjoy the process of pollution unfortunately. "That generates a lot of resentment.

She added: "That resentment needs to be managed."

Designer and researcher Pirjo Haikola said that optimism in the face of potential environmental catastrophe is essential.

"The only thing we can be is optimistic," she said. "We cannot just drop everything and stop doing things. But, instead of completely undoing what we've done, we have to think a new, in a way, and different kinds of systems."

"Industries are looking for new ideas"

Designers can play a big part, she said, pointing out that industry is eager to adopt new, more sustainable ways of operating.

"I found in my research that designers do have a lot of agency in industry," she said.

"I found that industry is way more receptive than it has been. This new paradigm, whether we call it transformation economy or the circular economy, you can see it happening, if we as designers take a more active role, and, do our research, and really understand what we are talking about."

Jalila Essaïdi agreed. "What I see is not only the designers looking for the industries, it's also the industries that are looking for new ideas. Solutions to solve their problems, because they have big problems".

Essaïdi's own work is in bio materials. It includes Mestic, a project that turns manure from the cattle farming industry into fabric.

Essaïdi and Haikola both felt that designers needed to think bigger and engage with these huge problems.

"We also have to facilitate these young designers in doing, and scaling up what they do," said Essaïdi. "They don't get the opportunity to grow and to demonstrate themselves. That's a big role for our government to stimulate them more."

"We should stop praising little projects," said Haikola. "We should really start to think of bigger systems where we can get involved."

Asked to give an example, she replied: "Work with industry and change the use of a material or a waste stream. Transform it more into a service kind of system, instead of a product system. It makes a massive impact, because the scale is so big."

"We may need some geoengineering"

The panel, chaired by Dezeen founder Marcus Fairs, who pointed out that the notion of the anthropocene era meant that saving the planet was now a design problem.

"When we were thinking about this talk, it was almost trying to make the anthropocene like an exciting, mega design challenge," he said.

"Humans are clever. They can solve problems. There is hope"

"People like Elon Musk are proposing moving to Mars and making Mars habitable but why don't we apply that kind of ambition of vision to our planet? Because there's only going to be a few lucky people who can get on the rocket to Mars."

The panel discussed whether geoengineering could solve the world's environmental problems.

"We may need some geoengineering in the future to manage some of the worst effects," said Haikola. "But at the same time we also need to be figuring out a different way to live. That will be a little painful but, you know, we have to do it."

"There's a problem with [geoengineering]," said Kluiving. "Because geoengineering sort of says to people, oh, just carry on with what you're doing. We'll solve the problem. And in fact geoengineering is a debatable thing. It's being researched right now. But we even don't know actually what's going to happen when you insert chemicals into the atmosphere."

To end the discussion, Fairs asked each panellist what they thought the single most important thing was in terms of saving life on earth.

Kluiving said he felt that rewilding parts of the world was most crucial. "If we are able to rewild more in Europe, to create national parks, we can combat biodiversity lows. We can do something about climate change."

Haikola said each person needed to identity their own agency, or their ability to change things for the better. "What can you do on a personal level and what can you do professionally, especially if you're a designer, to contribute to this most important issue that we have to deal with right now?"

Messina proposing making engaging in the southern hemisphere in environmental issues. "I would try to make sustainable design either aspirational or accidental for the south," she said. "You can turn a lot of people into accidental environmentalists depending on how you sell it."

Essaïdi said that overcoming fear was the greatest opportunity. "Being less scared as a society, because of a lack of knowledge and education," she said. "We are afraid of things that might happen and I think we shouldn't be that scared. We should be open for those opportunities in the future."

A full-length video of the talk, which took place on 29 October in Eindhoven during Dutch Design Week, is available to watch.