David Chipperfield Architects has teamed up with Karakusevic Carson Architects to create a pair of matching, hexagonal housing towers on an estate in east London.

Hoxton Press is a pair of two residential towers on the Colville Estate in Hackney. One is 16 storeys high and built using red brick, while the other is 20 storeys and constructed from a darker grey brick.

The project forms part of Karakusevic Carson's redevelopment of the entire Colville Estate – a three-phase project that will see the 1950s-built, 438-home council estate replaced with 925 new residences, along with improved community facilities and public spaces.

Hoxton Press contains a total of 198 homes, which are being sold privately to help fund the cost of new affordable homes elsewhere on the estate. This means the estate now accommodates a real mix of long-term residents, new council tenants and private buyers.

What is particularly unusual about the scheme is that turns the old model – which saw council tenants occupying tower blocks – on its head.

Both towers are hexagonal in plan, with balconies wrapping their corners. They are orientated to minimise the impact on the surroundings.

"At 16 and 20 storeys, they are not the most elegant of profiles, but by faceting them you get slimmer proportions," explained Paul Karakusevic, director of Karakusevic Carson, during a tour of the building.

"The idea is that there is no real back to the building, and no dark areas at ground level; it's very open," added Alexander Hill of David Chipperfield Architects.

"Upstairs the plans are very simple, arranged in concentric bands," he told Dezeen.

The hexagonal plan creates a simple layout, with six homes arranged around a central core on each floor of the building, plus penthouses at the top. Homes are organised at alternate corners of the building, allowing the generously sized balconies to function as extensions of the living spaces.

"Many tall housing schemes have these kind of barcode facades, because the developer asked for walls to be moved back and forward, but we wanted to create something with a strong plan and coherence," said Hill.

"Every apartment has an amazing corner view."

The two types of brick chosen for the towers both come from Belgian brick company Vande Moortel. They are made from the same clay, however the grey bricks were fired twice rather than once.

The aim was to give the towers distinct identities, but to also create an affinity with the history of the estate and the other new buildings on it.

"These are handmade, water-struck Belgian bricks. They have a smooth, stone-like quality," said Hill. "The colour-matched mortar helps to give the buildings a sculptural appearance."

The design contract was awarded to the two London-based architecture studios following an open competition. Having already designed the first two phases of the design, as well as the masterplan, Karakusevic Carson enlisted David Chipperfield's studio to maximise chances of winning the contest for phase three.

The scheme is being hailed by critics as exemplary. The FT's Edwin Heathcote described the revamped Colville as "a mixed new neighbourhood of real architectural quality", while The Observer's Rowan Moore said it contains "some of the best council housing ever built".

As well as residences, the taller of the two buildings contains a large space that will be used as a community cafe.

"The residents have been really supportive of the idea of building here, to pay for all of the new housing to be built, so obviously a sort of hipster cafe would not be great for the wider neighbourhood," said Karakusevic.

"If they're selling £4 cups of coffee, while people living behind can barely afford the electricity bill, its not a good feel." 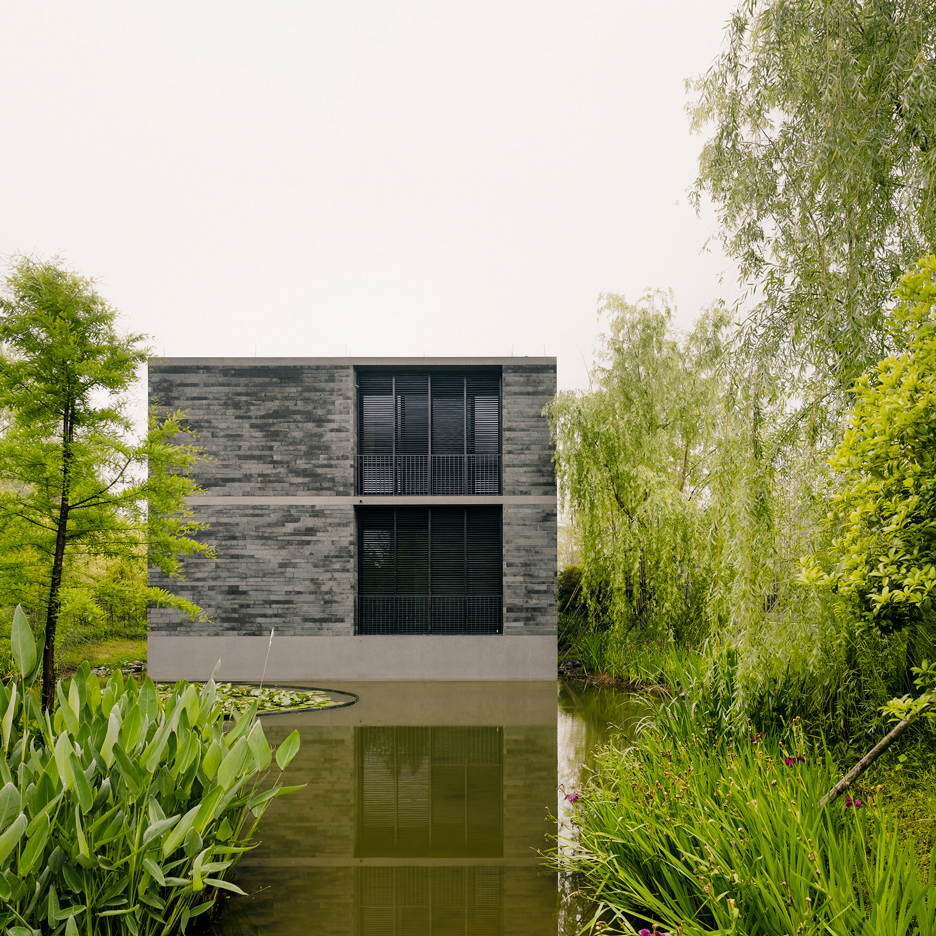 The cafe space features vaulted ceilings, as well as a large glazed frontage. This facade lifts in one corner, where the paving rises up to create a hump in the landscape – forming an informal meeting point.

The smaller tower contains the entrance to an underground car park that serves both buildings, and also includes storage for bicycles.

Hoxton Press is David Chipperfield Architects' first high-rise housing project in the UK, where the studio has recently completed an extension of the Royal Academy of Arts and created a new entrance to department store Selfridges.

In a post on Instagram, David Chippefield described it as "the first 60s-looking brutalist housing since the 60s".

The studio's other housing projects include a "village" of stone dwellings in Hangzhou, China, and The Bryant tower in New York.