Kohn Pedersen Fox has designed the Azrieli Tower, a 340-metre-high supertall skyscraper for Tel Aviv that will be the tallest building in Israel.

Shaped like an unfurling scroll, the tower will have a spiralling glass facade that narrows in stages towards the pinnacle.

At the top of the supertall skyscraper a viewing area will be open to the public, providing views over the Mediterranean sea and, on a clear day, as far as Jerusalem.

Currently the 238-metre-high Azrieli Sarona Tower is both the tallest tower in Tel Aviv and in Israel. At 285 metres, Ron Arad's ToHa tower will be the tallest when it completes in 2020, but it is currently on hold. 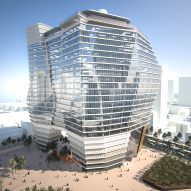 The Azrieli Tower's scroll-shaped facade will extend at the base to envelop an existing shopping centre. It will be part of the larger Azrieli Centre from developers the Azrieli Group.

"The spiralling facade appears to drape elegantly around the structure of both tower and base. As it embraces the existing complex, it unifies the four towers into a single composition."

Elliptical in plan, the circular form of the skyscraper is designed to complement the triangular and square and circular towers in the complex.

The Azrieli Centre will also include a metro station, a system of bike lanes, and a stop on the planned high-speed rail link to Jerusalem.

International architecture firm KPF has built several record-breaking skyscrapers before, including the fourth tallest skyscraper in the world, Brooklyn's second tallest building, and the "tallest infinity pool in the western hemisphere".