Toy company MGA Entertainment has preemptively sued Louis Vuitton in an attempt to prevent the fashion house from taking actions that might impact sales of its slime-filled children's purse Pooey Puitton.

Filed 28 December 2018 in Los Angeles federal court, the lawsuit aims to prevent any potential claims of trademark infringement that Louis Vuitton might have against the plastic, poop-shaped purse.

Instead, it asserts that the product is a "protected parody" of Louis Vuitton's luxury handbags.

The Pooey Puitton plastic purse takes the shape of a poop emoji with a handle and sparkly eyes. It is printed with a colourful, printed monogram, similar to the floral trademark pattern found on Louis Vuitton products, particularly the Spring/Summer 2003 collaboration with Japanese artist Takashi Murakami.

Intended as a children's toy, the purse is designed to store "unicorn poop", a glittery toy slime.

The children's toy manufacturer launched the lawsuit in response to a claim that Pooey Puitton's name and image violates the fashion label's intellectual property rights.

But MGA Entertainment asserted that "no reasonable consumer would mistake the Pooey product for a Louis Vuitton handbag", citing the difference in material, price, marketing and stockists.

Poop-shaped bag is a deliberate parody

According to the toy giant, the product is actually a parody of the luxury fashion brand, "designed to mock, criticise, and make fun of the wealth and celebrity" associated with Louis Vuitton products.

"The use of the Pooey name and Pooey product in association with a product line of magical unicorn poop is intended to criticise or comment upon the rich and famous, the Louis Vuitton name, the 'LV' marks, and on their conspicuous consumption," the statement reads. 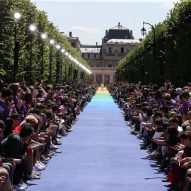 This is not the first time that MGA Entertainment has found itself in legal battles. The brand was famously sued by Barbie-manufacturer Mattel for allegedly stealing the idea behind its Bratz doll franchise.

Elsewhere, Virgil Abloh – who was appointed artistic director of menswear for Louis Vuitton in March 2018 – unveiled his polychromatic menswear collection for the brand during Paris fashion week.