The Berthold Lubetkin-designed Penguin Pool at London Zoo, an icon of modernist architecture, should be demolished says the architect's daughter.

The pool, created by Lubetkin and the Tecton Group in 1934, has been empty for 15 years, because penguins contracted bumblefoot infection from walking on the concrete.

Sasha Lubetkin told local paper the Camden New Journal that the pool should be destroyed as it is now useless.

"It was designed as a showcase and playground of captive penguins, and I can't see that it would be suited to anything else," she told local paper the Camden New Journal. "Perhaps it's time to blow it to smithereens."

"Latest thinking in the 1930s has long been superseded"

The Penguin Pool is regarded as a landmark project, both in terms of architectural design and engineering. It saw Lubetkin – who emigrated from Soviet-era Georgia to London in 1931 – and structural engineer Ove Arup pioneer the use of casting concrete slabs in situ in complex, load-bearing forms.

Interlocking curving ramps suspended over an elliptical pool turned part of the penguin's playground into a theatrical display for visitors.

But penguins were moved out of the pool in 2004, after the birds contracted a bacterial infection called bumblefoot, from micro abrasions caused by walking on the concrete.

Sasha Lubetkin was quoted as saying it was "terribly sad" to see the pool stand empty.

Her father, she added, had consulted with biologist Julian Huxley at the time to ensure that the enclosure design would be best suited to the penguins needs.

"Of course, like all areas of human endeavour, knowledge about animals and their habits is constantly changing and evolving, so in all probability what was the latest thinking in the 1930s has long been superseded."

Sasha Lubetkin's comments were picked up by the Evening Standard, prompting architect John Allan to write to the editor in response.

Allan, who wrote Berthold Lubetkin's biography, worked on the restoration of the Penguin Pool in the 1980s. He claimed that the flaws of the enclosure the result of decisions made by London Zoo, rather than the designers.

"The original poolside paving was largely rubber, for the penguins' comfort, but was replaced by the zoo with concrete," Allan wrote.

"In the restoration project we were required to apply a layer of quartz granules to the ramp surfaces for the benefit of the keepers but to the discomfort of the penguins." 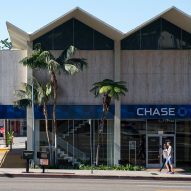 Modernist bank to be razed for Gehry's Sunset Strip development

He also noted that the enclosure had been originally designed for an Antarctic species of penguins who like to huddle together. The zoo switched to South American Humbolts, who prefer to burrow, rendering the original nesting boxes unsuitable.

George Osborne, editor of the Evening Standard and former chancellor, wrote back to agree that destroying the Grade I-listed building would be an "an act of cultural vandalism", calling Sasha Lubetkin's comments "patricidal".

Osborne, who was in office at the UK government when Britain's referendum on the European Union was called, saw a metaphor in the botched restoration project.

"Your observation that the original plan, if followed, would have been more animal-friendly reminds me of plenty of projects in politics that on paper look perfect but in practice are a fiasco. Brexit, anyone?"

He suggested that whilst the structure wasn't suitable for penguins on welfare grounds, a "more imaginative use" could be found.

Zoo has "no current plans" for Penguin Pool

London Zoos penguins now live in a new enclosure called Penguin Beach, which is the largest penguin pool in Europe. Some alligators were kept in Lubetkin's structure for a brief time, but for now the Grade-I-listed structure is animal-less.

A spokesperson for the zoo said they "have no current plans to do anything with the building".

Some other, more human-centric, Lubetkin structures are still standing in north London, including the Highpoint housing blocks in Highgate and the Finsbury Health Centre.

Main image is by FeinFinch via Wikimedia Commons.