The project included two structures – an extension of a stone structure as well as a new floating pavilion – built at the north and south side of the zoo's entrance, respectively.

The intervention by Team 730 is part of a wider effort by the local government of Mexico City to revitalise the public spaces of the Chapultepec forest, Mexico City's largest park.

"The 800-hectare urban park with its 12km of length, represents the biggest and more important public space of the country’s capital," explained Team 730.

To update the guest experience upon reaching the zoo, Team 730 built an extension on top of and around an existing stone building at the entrance.

The interiors of the ground floor and newly added floor are open and can be used for exhibitions or events.

Across a square is the new visitor's centre located in the floating pavilion, a glass-and-steel structure that the architects designed with a modular, grid-like layout.

The 1500-square-metre pavilion can accommodate classes or school groups, in addition to offering additional capacity for the general public.

To avoid disrupting the ground on which it is built, this structure is raised 90 centimetres onto steel stilts. Slatted canopies cover a large area around the building, providing shade for groups waiting outside.

Team 730 used yellow-painted steel for both structures. This choice is a nod to an existing entrance building made from adobe and painted a similar colour.

"Both, the floating pavilion, and the expansion share the spirit of a yellow-steel structure, a color that was taken from a heritage building located in between the two," said Team 730.

"Light and shadow act as material components to articulate the space, wrapping the geometry and connecting exterior with interior," the architecture studio added.

The interiors of the spaces were designed with simple, durable finishes that were selected to stand up to heavy use from visitors. Both of the structures have glazing in between certain columns to enclose the interior elements. 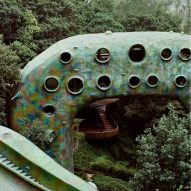 Within the park is the Alfonso L. Herrera Zoo, which dates back to the 1920s and is known as one of the world's most successful zoos at protecting endangered species.

In the 1980s, the zoo became the world's first institution outside of China to successfully breed giant pandas in captivity.

Team 730 is led by José Muñoz Villers and Carlos Marín, and is based in Mexico City.

For the Dubai 2020 expo, MMBB Arquitetos, Ben-Avid and JPG.ARQ built a glass-and-steel pavilion to represent Brazil that visitors wade through in rubber boots. In London, studio Bell Phillips has completed a timber pavilion in a park in Elephant & Castle.

The photography is by Oscar Hernández.