South Korean designer Jongha Choi has created a collection of space-saving, collapsible furniture that can be transformed from flat, "two-dimensional" forms into functional, three-dimensional objects.

The collection, called De-dimension, is comprised of a stool and a table made from aluminium. Each object can be folded down into a flat, seemingly two-dimensional form, and easily stowed away or hung on the wall like a picture.

While the furniture is space-efficient and suitable for increasingly popular micro homes, Choi's focus when designing the De-dimension collection was on achieving an illusion of perspective.

According to the designer, he wanted to create the experience of a two-dimensional image in a three-dimensional space, and aimed to challenge the ideas of perspective by blurring the lines between these dimensions.

The process of folding and unfolding the pieces offers a literal and physical representation of turning a two-dimensional image, like an initial design sketch, into a finalised, three-dimensional product.

"I have already experienced three-dimensional forms through various two-dimensional media, such as paintings, photos or video, but I haven't seen this happen the other way around," Choi told Dezeen.

"It is partly possible through virtual reality, but in this project I wanted the experience to happen in the real space, intuitively and physically," he added.

The designer's work poses the question why, in our current world, we don't interrogate the confinement of an image to a flat surface. De-dimension is therefore Choi's way of achieving a more stereoscopic experience of the flat image.

He began to develop a mechanism that would allow him to collapse the furniture down into isometric forms, starting with simple drawings of furniture on paper, which were then cut out and transformed into paper models.

These paper models were transformed into plastic models, and then into aluminium products, with each object designed to look like a perspective drawing when folded flat, giving it the illusion of being two-dimensional. 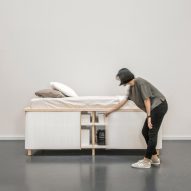 "Nowadays, owing to scientific technology, it is developing – from photography, film and even further towards virtual reality. Even the advent of three-dimensional printing skills shake our fundamental notion of the image."

"Unlike the past, we are not only seeing the image as a means of reproducing objects, but also as giving an essential identity to the image itself," he continued.

"In other words, though the image still shows its visual effect on a flat plane, it is not just an expression of representation, but it is creating an experience."

Initially released in 2016, the furniture was exhibited in October last year at The Artling and Pun Projects' Collectible Design exhibition in Hong Kong.

As micro homes become more popular in increasingly compact cities, space-saving solutions like Choi's furniture are on the rise. For example, ÉCAL graduate Yesul Jang designed a bed with storage capacity for millennials with limited space in urban dwellings.