Italian designer Simone Bonanni has designed a series of terracotta coffee tables for Moooi, which are made to appear handmade, natural and "gently imperfect".

Called Obon, the minimalist furniture collection features three tables with irregular, slab-like surfaces and cylindrical bases. They are an orange-brown colour, the shade of natural terracotta.

The Milan-based designer wanted to combine streamlined, geometric shapes with the aged appearance and texture of terracotta to create furniture items that appear both new and old.

The aim was to create a series of rustic tables that seem to be handmade rather than set using a mould.

"I immediately thought that these products should be very simple in shape but rich in material, devoid of visible technical details, soft and defined by reassuring contours," said Bonanni.

"The idea was to introduce a series of objects which appeared to be handmade and that could create a natural and gently imperfect tone. I wanted to make the object look beautiful for its spontaneity and genuineness, not for its complexity," he explained. 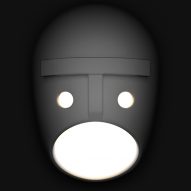 He began by sketching three "pure, irregular and graphic" shapes onto a canvas before building moulds and injecting them with terracotta clay.

Together with a ceramicist from Veneto, Italy, Bonanni experimented with a selection of glazes to give the table surfaces a more tactile appearance.

They tried various thicknesses of chamotte, a ceramic raw material with a high percentage of silica and alumina, to create layers of glazing on the table's surface and create an antiqued finish.

"We worked on its tactile aspect with the inclusion of various thicknesses of chamotte, aiming to generate a perfect mix between the present and the past."

Last year, Moooi announced the launch of a new strategy called More Moooi Moments, which sees the furniture and lighting company act more like a streetwear brand than a traditional design brand by dropping ready-to-ship collections throughout the year.

Recent projects by the brand include a series of lighting titled Party Lights and a set of wallpaper inspired by fictional extinct animals.