Designers Jos Kranen and Johannes Gille explain how they moved from creating bespoke design pieces to industrial products, such as their new The Party lights for Moooi, in our latest Design Dreams movie.

The two designers are founders of Kranen/Gille, a design studio focussed on interior products based in Den Bosch in The Netherlands.

The pair, who met when studying at Design Academy Eindhoven, made their name by creating one-off pieces for museums and galleries. But they recently worked with Moooi to create a series of industrially produced products.

"In our earlier days we worked a lot with galleries, in a higher-end market," explains Gille in the movie, which Dezeen filmed for Moooi at Kranen/Gille's studio in Den Bosch.

"But over the years we came to love the idea of making products that are more accessible to a larger audience."

The Party, a collection of wall lamps that resemble shocked faces, was announced yesterday at events taking place in Moooi stores around the world, as part of a new product launch strategy by the Dutch brand.

"The Party consists of five ceramic hats with an LED source inside them so the light comes out of their mouths and eyes," says Gille.

The pair exhibited prototypes of the lights in Milan earlier this year, where they were spotted by Moooi co-founder Marcel Wanders.

"We had the opportunity to take them to Milan in 2018," he continues. "Marcel Wanders saw them by chance and was fascinated by them, and thought, 'can't we turn this into a real Moooi product?'" he says.

According to Gille, the pair still approach designing industrial products in the same way they would a one-off commission. But creating an industrial product for a brand like Moooi enables their work to be seen by a much larger audience.

"It's still all about fun," he says. "Just like when we were kids, drawing stuff and making stuff. And now we have the opportunity to get those ideas out into the world."

Kranen/Gille's first product for Moooi was the Plant Chandelier. The chandelier is part of Kranen/Gille's Plant series of products, which features branching structural elements that reference both natural and industrial forms.

"It's a steel structure, which seems to be growing from the ceiling and sprouting six light points with frosted domes," says Kranen. 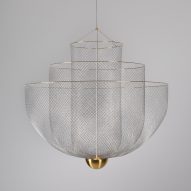 The chandelier was initially designed as the centrepiece of a commemorative exhibition of Kranen/Gille's work at Den Bosch's Het Noordbrabants Museum.

"We always want at the end to make a product," says Gille. "We knew that there was only one company who could pull this off, so we invited Moooi to have a look at it, and they were enthusiastic."

Moooi launched Plant Chandelier at its Museum of Extinct Animals show during Milan Design Week in April 2018. Kranen commends Moooi for the way in which it was able to realise the technically complex chandelier as a viable commercial product.

"Moooi obviously has a lot of experience with complicated products," he says. "They were very hands on, involving us in the process of turning the chandelier into a commercially available product in a way that made us feel very comfortable."

This movie was filmed by Dezeen for Moooi in Den Bosch. It is part of an ongoing collaboration between Dezeen and Moooi called Design Dreams exploring how successful designers turned their dreams into reality.