Dutch design brand Moooi is moving away from launching a glut of new products in Milan each April and will instead drop ready-to-ship collections throughout the year, starting with a collection of five wall lights called The Party.

The strategy, called More Moooi Moments, will see the furniture and lighting company act more like a streetwear brand than a traditional design brand, with regular drops backed by events in its showrooms.

"We will focus on a model in which each novelty is presented optimally in a specific moment during the year," said Moooi. "Each novelty gets its own content, focus and stage."

The first drop, a collection of five wall lights with human-like faces and distinct personalities, launches at 8pm tonight with events in Amsterdam and Miami. There will be another launch in March, one in Milan in April and others to follow later in the year.

Products weren't getting the attention they deserved

Until now, like many furniture brands, Moooi has taken all its latest designs to Milan, where the design industry gathers each April during Milan design week.

But the company felt that it was releasing beautiful products that didn't get the attention they deserved because they were all shown together.

"We have introduced beautiful products [in Milan] that were in limbo, because we have shown other more exciting products," said Moooi customer experience specialist Jan Haarhuis.

Moooi said the model of releasing new products during the furniture fair was the design world's equivalent of celebrating New Year's Eve. "Traditions are there to be broken," said the brand.

Products launched will be available to buy immediately

Under the old model, prototypes were shown in Milan before being put into production and often released to consumers months later. Now products will instead be available to customers at all Moooi's retailers worldwide at the time of the launch.

Moooi CEO Robin Bevers explained to Dezeen that the decision was taken to "avoid becoming predictable" and as a response to market needs and behaviour. This despite the fact that 50,000 visitors came to its Milan exhibition in 2018, which Bevers said was "an absolute record for us".

The CEO stressed that Moooi will not be abandoning Milan entirely, but instead moving towards a "multi-platform brand presence" as a response to online and digital technologies. "If you want to make designer's dreams come true, you have to still be present in Milan," he said.

The Party wall lights launch in Amsterdam and Miami

Moooi has chosen to launch More Moooi Moments with a set of five wall lights, called The Party, designed by Kranen/Gille which have a "playful" and "mischievous" side.

The collection consists of five cast ceramic wall lights. Each has a round face with a variety of facial features and a large round mouth from which an LED light shines.

They are Ted, the evil mastermind of the group; Bert, a sombre member of the group embittered by jealousy; Coco, the leading lady and a self-made woman; Glenn, the patriotic heart reacting to his turbulent youth; and the Mayor, who looks at the world through his monocle.

Moooi describes the collection as "a family of wall lamps inspired by a clan of strong, captivating personalities", namely the want-to-be aristocrat, the black sheep, the opportunist, the patriot and the evil mastermind.

Their faces are intended to invoke our fascination with secrets, family dynamics and intrigue as each lamp represents one of various personality types.

"Fragments of The Party's personalities appeal to your own hidden side, stimulating recognition, interest and curiosity," said the brand.

They are making the change "because it's fun"

A number of high-profile designers such as Tom Dixon stayed away from Milan in 2018, suggesting the start of a sea change in the design world. Likewise, Sebastian Wrong of Established & Sons told Dezeen earlier this year that designers had to be ready to sell products to market immediately to survive.

The move to many launches through the year and an immediate purchase model is one that the fashion industry is increasingly adopting. But Bevers insists that rather than be led by fashion brands, Moooi is changing "because we want to, because we feel it is the right thing and because it's fun."

"Well of course there is a lot we can learn from the fashion industry, but this is not one of those things," he said. 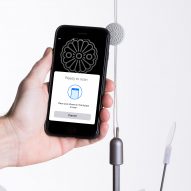 Moooi fights back against knock-off products with authentication app

"In fashion you need many introduction moments because the collections have such short life spans. At Moooi we want to create pieces that people can love forever, that they will never tire of," he continued.

As well as the launch events in Amsterdam and Miami, the brand will livestream these events in their London, Stockholm and New York showrooms, as well as on Facebook and YouTube.

Last month, Moooi unveiled The Button, a device that allows customers to verify whether a piece of furniture is a genuine Moooi item, by scanning the wireless chip with their smartphone using a mobile app.