Casa Lluvia, or Rain House, was designed to give four generations of the same family a place to live together. It is located in the Los Rios region of Chile, which is known for its heavy rainfall.

The form of the home and its angular roof were "inspired by precarious tents, which are made by the local lumberjacks in the forest", said the architecture firm in a project description.

These structure are made "with a nylon [sheet] tensioned by threads, and sometimes with a central pillar to let the water run off the simple construction".

Set atop angled stilts in the forest, the residence is intended to provide views of, and resemble, the surrounding treescape. This setup also creates sheltered spaces beneath the structure, designed for barbecuing and outdoor relaxation.

Dark, textured finishes characterise the home's interior surfaces and exterior cladding. Weathering-steel panels cover the exterior in a vertical pattern. The metal was allowed to rust naturally, then sealed to maintain the desired finish.

Inside, reclaimed woods from many different sources were used to achieve a rich and textured effect.

"The interiors are lined with native woods, recycled from old sheds and local houses, which had been dismantled due to poor condition, or because a new building will be made in its place," said Equipo Cazu Zegers.

"The use of these recycled native woods, such as oak, rauli, coihue and laurel, give the house a reddish tonality that interacts perfectly with the rust of the steel structure." 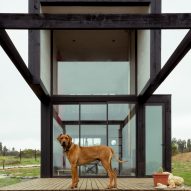 The architects chose a limited range of tones for furniture and other accents, giving precedence to the building and its natural surroundings.

The main entrance is on the southern side, into a vestibule in the middle of the floor plan. Three angled volumes converge at the centre, and follow a north-south orientation.

Because of one family member's limited mobility, the architects opted to keep all the living spaces on a single level.

"All accesses are done in steel ramps with a wood cladding, to allow for wheelchair access," the studio said.

The centre of the house contains the public areas, and is framed on three sides by large expanses of glass that look out onto the natural surroundings. A covered lounge area is set at the end of the space.

The two other volumes each contain the bedrooms. Along the east side of the property are four suites laid out along a corridor, each with an en-suite bathroom.

To the west, Equipo Cazu Zegers placed three children's bedrooms, each with two beds. A playroom for the kids is located nearby, and enjoys its own covered deck that is visible from the main part of the home.

A compact lower level forms a plinth on which the home rests. This area contains a few additional bedrooms, as well as mechanical and laundry rooms.

Chile's dramatic landscape provides a variety of picturesque setting for private houses. Other examples in the country include a home for a surfer client that has a perch for observing the waves, and a wooden house lifted on stilts.

Photography is by Daniel Corvillon.