A group of architecture and design students plans to sue The Glasgow School of Art over its alleged failure to provide adequate education during the coronavirus pandemic and for cancelling their degree shows.

The group has hired law firm Harper Macleod and has launched a crowdfunding campaign to fund their legal challenge for alleged "underprovided education".

The group, called Art School Racket, consists of around 35 students from courses including architecture, fashion and design innovation as well as the Masters of Letters (MLitt) in Fine Art Practice course.

Students were six months into their courses when the first UK lockdown happened in March 2020. According to the group, the Scottish school then "chose to cancel the remaining seven weeks of the semester, two days after campus closed".

"We had no contact from our tutors for 10 weeks whilst other universities, like the University of Glasgow, were tutoring students online within a few weeks," the group said. "GSA management instructed tutors not to speak to us during this time."

The Glasgow School of Art (GSA) degree show was also cancelled, which meant students missed out on meetings with curators, galleries and collectors, which they say is another key reason for studying at the school.

"We've still not got our promised degree show," said the group's spokesperson Penny Anderson. "We've had talks, it's been promised, there were various surveys on what we wanted, but so far nothing concrete."

The school eventually gave students the option to continue with remote learning, or withdraw from their courses with no assurance of future re-entry, according to the student group.

There was a "limited amount of Zoom tutorials very late and after lockdown was lifted in late July last year, roughly one month before our final submission deadline," Anderson said.

However, she said remote learning wasn't a possibility for many of the students at the school.

"There was no way Mlitt sculptors, a sizeable group of the complainants, could do welding in a shared lounge, or printmakers work without printmaking facilities," Anderson said.

According to the students, the issues during lockdown came after an "already disrupted year for our cohort, impacted by mismanaged studio and workshop access, University and College Union strikes and closure of the student union".

Complaints rejected by the school

Art School Racket said it had appealed to the school through the internal complaint procedure, asking for a pause option that would suspend studies until it is safe to return to campus learning and for a partial refund of fees to reflect the difference between studio-based and remote learning.

It said its complaints were rejected by the school.

Coronavirus forces design schools, studios and events to "transform a difficulty into an opportunity" by going digital

A spokesperson for the school said: "The complaints in question went through the GSA’s complaints process, the final stage of which is for the complainants to ask the independent Scottish Public Services Ombudsman [SPSO] to review the matter."

"The SPSO briefly looked at the complaint that we had submitted to GSA internally," said Art School Racket spokesperson Harriet Orrey-Godden. "GSA had rejected all of our complaint points and the SPSO decided they agreed with GSA. They rejected a full investigation."

In addition to launching the crowdfunding campaign, the student group is preparing an auction of work donated by students, as well as two pieces by architect Alan Dunlop, a former tutor at the school, to fund the legal challenge.

"There was no remaining viable alternative than legal action, otherwise the GSA will continue to lure us into the sausage machine of cuts to budgets but increased fees and reduced facilities," Anderson said of the group's decision to sue the school. 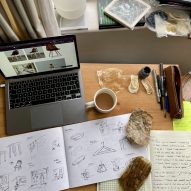 The pandemic disrupted education around the world, with many design schools switching to remote learning in spring last year and cancelling degree shows.

Earlier this year, students at the Royal College of Art in London protested proposed plans to scrap physical degree shows.

A survey conducted by Dezeen and Bath School of Design in February found that one in four students said their wellbeing has suffered while studying from home during the pandemic, although half of them saw advantages in remote learning.

The Glasgow School of Art was founded in 1845 as one of the first Government Schools of Art and Design and focuses on education in the visual creative disciplines, with degrees in architecture, design, fine art, simulation and visualisation and innovation.

The university used to be located in a Charles Rennie Mackintosh-designed building that was significantly damaged in a 2018 fire, following another blaze in 2014. The building's structure has been stabilised and ongoing site clearance works are continuing.

A collection of Glasgow School of Art students recently showed their graduate collection virtually as a Dezeen School Show.