The Henry Arctowski Antarctic Station, a prefabricated research centre with golden-coloured metal cladding, is set to be built on King George Island in Antarctica.

Located in the South Shetland Archipelago, the research centre for the Polish Academy of Science has been designed by Kuryłowicz&Associates to accommodate up to 29 scientists studying the polar region.

The prefabricated structure has been developed to facilitate quick construction, but able to withstand the harsh climate.

"The design of the station is shaped by a detailed functional program, the extreme environmental conditions of the site and by a modular construction strategy which has been imposed by site access restrictions," explained the Polish architecture studio.

"The result is a highly efficient tripartite ensemble that provides scientists with research space and a 'home away from home' atmosphere, while the sinuous exterior seeks to capture the mystery of arctic life."

The Henry Arctowski Antarctic Station will be elevated on three metre high steel stilts to reduce its impact on the landscape, but imitate the effect of "an upside-down aircraft wing" to keep it firmly on the ground.

It will be constructed with prefabricated timber panels clad in durable copper and aluminium alloy. This will create a golden-coloured outer layer designed to resemble "futurist sculptures". Futurism is an art movement that began in Italy and emphasised the dynamism of the modern world.

The entrance to the building will be positioned centrally, where it is protected from wind and high levels of snowfall, and lead into a double height social space at the core of the building. 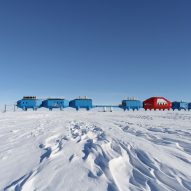 Flanking the core will be a range of work spaces, including a lecture hall and laboratories, as well as more living spaces including private accommodation, a gym and a sauna.

The building will also have a greenhouse, designed by Kuryłowicz&Associates to provide a "familiar environment" for the residents, where they will also be able to grow their own produce.

Its interiors will reference traditional nautical design, with wood-lined rooms and furniture designed to create the feeling of warmth.

Every room will be complete with large windows to maximise natural light and bring residents panoramic views of the island setting.

The Henry Arctowski Antarctic Station will be powered by series of wind turbines positioned south of the station.

In 2016, White Desert also took to the Antarctic to build a series of igloo-like enclosures, billed as the "only luxury camp in the interior of Antarctica".