Food design studio Bompas & Parr has created the "world's first" vegan guest suite inside a London hotel, omitting the use of leather, wool and feathers throughout its interiors.

Decked out exclusively in plant-based materials, the guest suite at the Hilton has been created by Bompas & Parr in a bid to show that veganism is "no longer only a dining trend, but can also influence a wider lifestyle choice".

The suite is set within Hilton London Bankside, just a short distance from Southwark tube station, and comprises of a bedroom, lounge area, and sizeable bathroom.

A majority of surfaces have been upholstered in Piñatex, a leather-alternative fabric originally developed by company Ananas Anam, which is made from cellulose fibres found in waste pineapple leaves. It covers the room's slate-grey seating, bright red scatter cushions, and flower-embroidered headboard designed by artist Emily Potter.

The use of the material is also intended to serve as a subtle nod to local London history, as when pineapples first arrived in the capital they were sold in Borough market, which is just a few minutes walk from the hotel.

Typical feather stuffing in pillows has been traded for organic buckwheat, millet seeds, or bamboo fibres. Additionally, cotton has been used instead of wool to make the carpet. 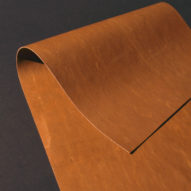 Don Kwaning's Lino Leather is a vegan alternative to leather

All of the snacks, stationery, and cleaning products used in the suite by housekeeping staff are also free of animal products.

This is not the first time that Bompas & Parr has worked with environmentally-conscious materials – back in 2016 the agency used bioluminescent algae to form a glow-in-the-dark collection of jewellery.

Most recently the designers worked to create the "world's first non-melting ice lolly", in light of global warming and our increasing need to keep frozen treats cool as temperatures rise.