German start-up Holoride has designed a virtual-reality experience for the backseats of taxis, for passengers in autonomous vehicles or for kids on long car trips.

The resulting experiences are not only immersive, they help to combat motion sickness by syncing what the passenger sees with what they feel.

"People often can't enjoy transit time, because watching a movie or reading makes them feel uncomfortable," said Holoride. "Time is a precious thing, but most of it feels wasted when you are on the road."

"We believe that a precious thing should be enjoyed. No matter how far you go, a ride should make you happy, maybe even smarter or more productive."

Holoride is part of a subset of VR known as mixed-reality, or XR, because it mixes the virtual and real worlds, without entering the terrain of augmented reality.

A video promoting the concept shows the user slipping on a headset to access experiences including driving the streets of a brightly coloured cartoon city, soaring through a Jurassic landscape as a pterodactyl and shooting missiles from a careening space fighter.

When the car stops at a pedestrian crossing in real life, the passenger, in VR, gets to play a whack-a-mole-type game with the birds that waddle across it.

When the car drives along a winding road, the passenger accordingly veers and dips through forests or through space. Holoride says it is "turning vehicles into moving theme parks". 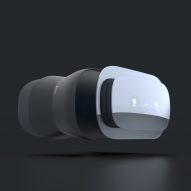 The company's content is playable through standard XR headsets, and it will soon be making a software-development kit available to creators who want to design for the platform.

Currently its technology draws on map, navigation, localisation and vehicle data, but Holoride sees this range of inputs expanding with the growth of smart cities. Other nearby cars are a potential future source of data.

While there are already plenty of use cases for the technology — from Ubers to family road trips — this could explode with the arrival of self-driving cars, which effectively eliminate drivers and make everyone a potential VR-engulfed passenger.

Holoride demonstrated its product last week at the Consumer Electronics Show (CES) in Las Vegas, where it was one of the most popular items exhibited.

The start-up was founded last year by entrepreneur Nils Wollny, VR specialist Marcus Kühne and engineer Daniel Profendiner, all former or current employees of Audi who licensed the technology from the auto maker after initially developing it there.

Among other recent developments in XR is Varjo, a headset with human-eye resolution.