Norwegian furniture and homeware brand Northern has introduced 12 new designs to its collection, including a daybed, a watering can and a flashlight.

Northern enlisted 10 designers to create furniture and accessories to join its debut homeware range, which launched in Stockholm last year. Before that, the company exclusively produced lighting products, under the name Northern Lighting.

The new additions were unveiled at the IMM Cologne furniture fair in Germany.

Norwegian designers Morten Skjærpe Knarrum and Jonas Norheim, who head studio Morten & Jonas, oversaw all of the designs, including two of their own. Their contributions include a lamp and a day bed.

The Blush pendant lamp has a semi-spherical head and a long, narrow neck. Meanwhile the Daybe lounge sofa features a thin metal frame, plus a detachable backrest that allows it to be used as a bed as well as a seat.

Also in the collection is the Grab watering can by Norwegian designer Stine Aas, which consists of two interconnecting cylinders that meet at the base of the spout. It is available in a dark green, yellow or plum colour. 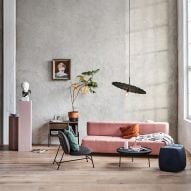 "The product meets the need for attractive, multifunctional designs while reflecting the popularity of urban gardening," said Northern.

Another product is the Ink wall lamp by Stockholm-based designer Felix Isidorsson, which features a concave disc-shaped body with a matt black finish. When turned on, the light creates a subtle halo effect, intended to evoke the glow of the moon.

The Ombre table lamp by Antoine Rouzeau has a flat, faintly curved head that rests of a narrow neck and cylindrical base, while the Reveal pendant lamp by Silje Nesdal comprises a hollow sphere of glass, framing a horizontal light suspended on a copper-coated cord.

Completing the collection is the geometric torch called Trace, created by design studio Gridy. It features a conical head and a cylindrical handle.

Other new launches at IMM included a "casual" desk designed by David Chipperfield and a collection of outdoor textiles by Kvadrat.