Oppenheim Architecture has coated a water-treatment plant in Muttenz, Switzerland, in a mixture of stone and clay, to create a building reminiscent of a natural rock form eroded by flowing water.

The architecture studio designed the building to elevate what would usually be a private building into a landmark for the nearby town that would draw visitors into educational gallery spaces.

US- and Switzerland-based Oppenheim Architecture created the treatment facility for the Muttenz municipality to blend demanding technological needs with a sense of openness, all while respecting the protected woodland next to the site.

The treatment facility was designed to look like it was carved out of a solid form.

Cracks in the windowless elevations aim to draw in curious visitors, with entry via a cavern-like space that appears to have been cut out of the structure's base.

Crossing a series of stepping stones, a spiral stair leads up to a viewing platform from which the infrastructure of the plant - arranged across three floors - can be observed. 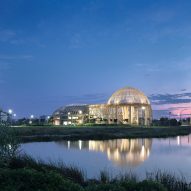 A thin opening in the facade gives views back out across the adjacent woodland.

"The role of the architecture is to link and express the unique and state-of-the-art technology, placed in a natural ecosystem and emphasising the importance of the purification process," explained Oppenheim Architecture.

Sweeping cuts in the roof draw daylight into the public areas, creating a contrast with the darker functional spaces of the plant.

Many designs for water and sewage treatment plants look to the landscape in order to create new public spaces beyond their utilitarian function.

In Portland, Oregon, architecture studio Skylab topped a plant with a series of rainwater-collecting fins, and in Taiwan a sewage treatment plant by Habitech Architects imitated mountains with a series of domed forms.

Photography is by Börje Müller unless stated.