It is believed the single-storey dwelling was constructed in the 1950s, although the exact date of its completion is unknown. This makes the residence among thousands built between 1949 and 1966 by Eichler, who is credited for introducing modern-style tract housing to America.

The renovation project was designed by Klopf Architecture, a San Francisco firm that has prepared designs for over 140 Eichler houses, including a similarly-hued home in Mountain View and a gabled one in San Mateo County clad in pale wood.

This latest project had several goals. The client – a young couple, one of whom is a user interface type designer – wanted to retain the Eichler style, while heightening functionality and establishing a better flow between inside and out. They also wanted a more attractive entryway, as the original approach lacked distinctive features.

On the exterior, the team painted the grooved plywood siding grey and added yellow accents – hues that are part of the historic Eichler colour palette. A redwood wood fence fronts a portion of the property, providing privacy without making the home appear withdrawn from its surroundings. 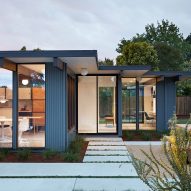 To create more space for a hallway bathroom and the master bath, the architects added roughly 140 square feet (13 square metres) to the dwelling. The team also added insulation to the home's walls and placed a thick set of insulation boards over the roof decking.

"We then used a spray-applied foam insulation and an elastomeric coating," the studio said. "The roof is colloquially referred to as 'spray foam' and is very typical for Eichler home renovations."

Inside, the living room and dining area were completely reconfigured. An original brick fireplace was removed, enabling the addition of glazing and skylights that "flood the home with natural light".  Sliding glass doors open onto a refurbished patio in the rear that acts as an outdoor living room.

Overhead, wooden ceiling boards were refinished, and ceiling beams were left exposed. The ceiling was previously coated in paint.

"It was stripped down to bare wood and then sealed with a clear sealer," the studio said, noting that a matte sealer was specified, but the painter accidentally used a glossier version. "That was one slip-up in the project, but it was determined the clients could live with it, so it was not remedied."

The home formerly had a galley kitchen, which was dismantled. The new cooking area overlooks the great room and is afforded clear sight lines to the backyard. White cabinetry, a tile backsplash and a walnut bar define the space.

Interventions were made in other parts of the home. A large, white wardrobe was installed in the master bedroom. In a bathroom, vivid red tiles cover the walls. Throughout the dwelling, the team installed grey flooring, which serves as a connective element.

"Durable grey porcelain floor tiles unify the entire home, creating a continuous flow," the studio said. "They, along with white walls, provide a backdrop for the unique elements and materials to stand on their own."

Eichler homes are found throughout northern and southern California, with an additional three located in New York, where Eichler was born. Another one that has been recently renovated is a two-storey 1965 dwelling in San Francisco by local studio Michael Hennessey. 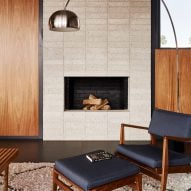