Colours inspired by the Mexican city of Monterrey are used to decorate the interior of this taco restaurant in Vigo, Spain by locally based designer Erbalunga Estudio.

Located in the Vigo city centre, Sierra Madre was set up by Mexican owners who commissioned Erbalunga Estudio to create an interior that reflected the street food on the menu.

"The authenticity of the ingredients and recipes meant creating our own design, a way of creating a space that reflected the proprietors vision, values and enhancing the ethnicity of the menu," said the studio, which is led by interior architects Rubén Rodríguez and Arminda Espino Vera.

"Time and comfort was a key consideration in the project, as Sierra Madre was to offer typical urban food of Monterrey but with a more a elaborate, slow food concept," they continued.

The 103-square-metre restaurant has a long and narrow floor plan which is divided up into smaller areas. These areas are defined by MDF partition walls that form boxes of varying scales.

Each box is painted in a bold shade of either green, yellow or pink and teamed with pale pine wood furniture and ceramic brick screens.

"The composition of colour plays a fundamental role to generate the Mexican atmosphere, opposed to the external reality of the city of Vigo," said the design team. 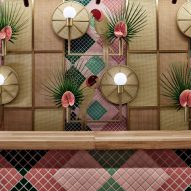 An open timber framework across the ceiling is designed to create a sense of height while also supporting a network of lights. Meanwhile, the zig-zagging partition screens made from stacked ceramic bricks are intended to create the illusion of depth.

"Another concept necessary for this space was to create enticing routes and corners to seating areas," explained the studio. "In this way of blurring the limitations of the restaurant's seating, the ceramic screens are particularly important as they generate transparencies and non-existent depths to give an atmosphere of a larger but more intimate space."

"What has been created with blurring limits, introducing scales and to establish spatial situations with different environments is creating a city inside the premises," they added.

Other Taco restaurants featured on Dezeen include this Vancouver eatery inspired by luxury 1950s Mexican vacationlands, and a restaurant in Austin, Texas that references mid-century American roadside buildings and signage with its bright red columns and a distinctive roofline.

Photography is by Iván Casal Nieto.