Ting Chong's designs will be visible all over the Artscape Theatre in Cape Town, where this year's Design Indaba conference takes place from 27 February to 1 March.

The design is intended as an example of how humans and machines can collaborate to create something better than either could design alone. He also wanted to find out if it was possible to teach computers to be creative.

"Everything truly interesting begins with a question," said Ting Chong.

"With an overarching theme of 'support' as a starting point, we pushed it further and asked ourselves how AI, bots, computers and applications 'combine' with us to create our work and support us to make beautiful things."

To create the branding, Ting Chong – a former Design Indaba Emerging Creative – script and plugins to mimic the effect of AI that would explore and create. 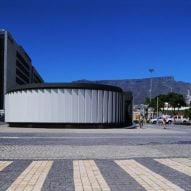 These forms were animated into a randomly moving pattern, which was fed into the computed to develop an infinite number of variations and combinations.

This was combined with key information about the event, such as the location of the toilets and speaking schedule, then compiled into a single document that could be read by the AI.

"These are not the type of things computers would 'think' about," said Ting Chong

It resulted in brightly coloured and varied signage that incorporates geometric shapes, along with what appear to be spray-painted lines.

In total, 11 lines of code, 490 words, 13 shapes and five colours were used to create the identity, which the organisers believes demonstrate the potential of human and AI collaboration.

"Design Indaba and Daniel Ting Chong  are exploring an alternative reality, one where technological symbiosis creates something better, something that’s both human and inhuman. It’s no longer Man vs Machine, it’s now Man X Machine," said the Design Indaba organisers.