Why Architects Group has converted a residential building in Mashhad, Iran, into a commercial showroom for the Bouzarjomehr Company, adding a generous outdoor staircase leading to a public roof terrace.

The Iranian architecture studio transformed an existing dilapidated house to create a showroom space for the company, which specialises in distributing cables and wire.

Rather than demolishing and replacing the existing building, local office Why Architects Group chose to retain usable parts of the structure and create a new public space for the area.

The design aimed to respect the heritage of the neighbourhood and fit in with the surrounding context, while introducing a new architectural intervention and programme to the site.

"The collective memory of the old neighbourhood's population played a decisive role," the architecture studio explained.

"So this project had to empower the neighbourhood's already devastated public space due to unplanned commercial development in the residential areas."

A front yard was transformed into a miniature public plaza that functions as an extension of the pavement, in order to enhance the connection between the building and the public domain

The building can be isolated from the street using a retractable metal fence. When this is pulled aside the entire area in front of the showroom is accessible. A brick bench occupying a shaded spot between two trees on the pavement invites the public to linger.

An oversized stair extends through the centre of the building, bypassing the showroom and offices to connect the street level with the a guest suite on the rooftop and the terrace.

"The stairway became an all-around design concept that managed to link the different functions together," said Why Architects Group.

From the street, a shallow ramp leads down to the showroom areas on the basement level. These spaces are lined with full-height windows looking onto a planted front yard. 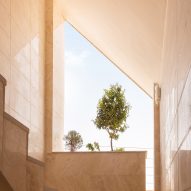 An opening carved into the staircase contains an entrance leading to a reception area and the main office spaces. An open area to one side of this level can be used as a further presentation space.

The void inserted into the stepped section of the facade also serves to funnel daylight into the interior of the ground floor and basement level.

The building's material palette is informed by the traditional methods of residential construction in Mashhad, where red brick is the most prevalent material.

Weathered steel panels used for some of the external surfaces also reference the galvanised iron sheets found on many local houses, while scrap metal used for railings, chandeliers and the retractable fence lend the renovation project an industrial feel.

Several architects working in Iran have created interesting forms and facades that play with the private and public.

ZAV Architects built a home for orphaned young women in Khansar with balconies that can be covered to allow the girls to enjoy fresh air, and CAAT Studio created a house for a stone seller in Mahallat with undulating walls that show off the local travertine.