Balconies with adjustable covers pepper the brick facade of the Habitat for Orphan Girls designed by ZAV Architects in Khansar, Iran.

The residential centre provides a safe place for girls for aged between seven and 16 to live, learn and play in a country where young women without families can be extremely vulnerable.

The Habitat for Orphan Girls, which was the winner of the 2018 AR House award, has distinctive balconies with covers that allow the girls to negotiate not wearing a hijab – a veil worn by some Muslim women that is compulsory under law in Iran – outdoors.

With the covers up, the girls are free to sit outside without a headscarf on.

"Coverable balconies help the girls have inside-out spaces, and also avoid breaking the rules of a strictly religious context, which push them inside the spaces or wearing hijab all the time," architect and founder of Tehran-based ZAV Architects Mohamadreza Ghodousi told Dezeen.

"The covers also negotiate [with the] city in terms of colour and texture for special occasions, while reminding dwellers that hijab is dynamic and you may have the right to wear it or not."

During different times of the year and for certain religious festivals, different coloured coverings and decorations can be hung from the balcony frames.

A bight yellow that matches the building's roof is used for day-to-day purposes, but can be switched out for black during the month of Muḥarram.

For Nowruz, the Persian celebration of new year, traditional spring cleaning rituals can be performed using the railings, and coloured lights and banners can be strung from the balconies for celebrations throughout the year.

The two wings of the building have inwards curving roofs, that overhang to shelter a courtyard space below in a style Ghodousi describes as "introverted architecture". 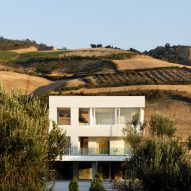 Inside, ZAV Architects designed the layout to create a sense of homeliness for the girls that live there. Rejecting the typical dormitory layout, the girls share private bedrooms with one or two other girls. Shared public spaces are designed to be like the ones found in a typical family home.

"They play in the yard, read on the balconies, watch TV in the TV room, eat food in the dining space and have fun in the corridors and library," said Ghodousi.

The brightly coloured coated roof, brickwork that matches the historic neighbourhood, and courtyard with a fountain and swing for playing add to the comfoting domestic environment.

"These concepts bring sense of belonging for girls, they really need to feel 'belonged'," added Ghodousi, who designed the project for a benefactor, the late Ahmad Maleki. Maleki's wife and best friend were closely involved in the process of realising his dream for home for Khansar's orphaned girls.